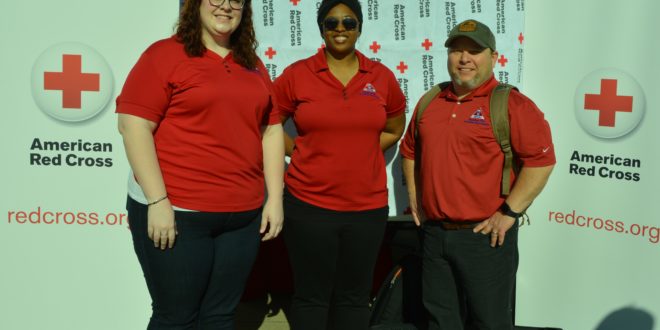 Sounding the Alarm with the Red Cross

AFSA Participates to Educate the Public About Fire Sprinkler Systems

Every year the American Red Cross presents its Home Fire Preparedness Campaign and through this campaign provides a local community outreach opportunity across the country with the “Sound the Alarm – Save a Life” program. This program takes place in late April/early May annually and is designed to identify especially at-risk neighborhoods for fires and to educate their residents about fire prevention, escape plans in case of emergencies, and even provide general information on other natural disasters. In addition to this education, the Red Cross supplies free smoke detectors to be installed by local volunteers in homes throughout the neighborhood (up to three per home). Or, if a house already has smoke detectors, volunteers can check the batteries and dates to ensure they are working in case of emergency—a task that slips the mind of many!

In 2018 the American Fire Sprinkler Association (AFSA) partnered with the Red Cross as a national partner to support this campaign. With our members’ help, we were able to reach our fundraising goal and become official sponsors of the program, which allowed us to add fire sprinkler language into this life-saving into the materials for this campaign that touches millions across the country each year.

The Experience You can imagine my excitement when I received the opportunity to volunteer with our local Red Cross office to participate in one of our local Sound the Alarm program days of action! Finally, I’d get to be boots on the ground helping spread the message we worked hard to partner with the Red Cross on. The day started out easy, meeting together at our local Red Cross headquarters and being divided into teams of three that were then directed to one of three roles: the recorder, the installer, and the presenter. I had the pleasure of volunteering with a few of my co-workers and ended up with the role of “presenter.” In this role, you’re responsible for basically being the face of the group—greeting residents, explaining your purpose there, and then, if allowed inside, installing or checking currently installed smoke detectors. You are also the one who educates residents on smoke alarms, fire escape plans, residential fire sprinklers, and other natural disaster preparedness. Recorders are responsible for taking note of the addresses you install smoke alarms in, the number installed, collecting some basic information, and filling out paperwork for recordkeeping. Then installers install the smoke detectors. There really is a role for every type of personality, so don’t be worried that you’ll have to be the one doing the talking if that’s not your thing. And if you’re worried about volunteering because you think you might not know all the facts? Don’t stress! The Red Cross provides enough resources and day of training to fulfill any of the three roles comfortably.

After our team of three was trained and ready to go, we were designated a section of a previously canvased neighborhood and let loose! All the Red Cross volunteers who attend on a given day divide up an assigned neighborhood among three or four different teams to cover a lot of ground in the few hours they’re out. We were given a time to meet back for lunch, a contact should we run out of any supplies, and then we were on our way.

The actual volunteer experience was a blast. We went door-to-door, meeting people we may otherwise never have the chance to meet in our local neighborhood and additionally had the opportunity to educate them. I found the work especially fun and easy as a professional in the fire protection industry because it really served as a natural opportunity to extend my passion beyond the walls of the office. While I can’t recall the exact number of smoke alarms we installed that day, or exactly how many people we spoke to, I can say I was pleasantly surprised by the number of people we got to educate and assist that day! Many of the people we interacted with had absolutely no working smoke detectors in their home, had far outdated detectors that work no longer worked, or had just plain taken them off the wall because they were tired of accidentally setting them off. Additionally, many knew next to nothing about residential sprinklers or that they were even an option in homes. Being a part of their recognition and understanding as we installed new detectors, moved some existing detectors so they “wouldn’t go off every time I burn the rice,” and educated on fire protection and escape options while installing, I felt like I really did some good for the people we met with that day. Additionally, the Red Cross canvases ahead of the event so neighborhood residents know you are coming and we were received with only warm welcomes and excitement.

All-in-all this was an amazing experience that really gave me the opportunity to put my passion to work! Knowing about and monetarily supporting the campaign and our partnership is one thing, but being out there meeting people, seeing faces, and impacting lives in person is a completely different, and refreshing, opportunity!

The Facts Every day seven people die in home fires and most of those victims don’t have working smoke alarms in their home. The Home Fire Preparedness Campaign hopes to drastically reduce those numbers. In just four years since its inception, the Sound the Alarm campaign has installed just under two million smoke alarms made almost 800,000 homes safer and reached a staggering 1.5 million youth through education and outreach with this program. The Red Cross estimates that more than 600 lives have been saved thanks to the installation of smoke alarms.

So what are you waiting for? The opportunity is there, and I can say with certainty it’s a fun volunteer opportunity that really gives you the chance to take your passion outside of the day-to-day routine of the office and help to save lives in a new and different way with just a little bit of time on your part!

While the Sound the Alarm program has ended for 2019, it is an annual campaign that will be back in 2020. In the meantime, if you’re looking for other ways to get involved the Red Cross and AFSA partnership is ongoing year-round and you can contribute to that partnership through redcross.org/afsa-pub to support the life-saving work of the Home Fire Preparedness Campaign.

You can make a difference in the lives of others with the American Red Cross Sound the Alarm Campaign. Paulene Norwood, executive director for AFSA’s Sacramento Valley Chapter, volunteered in her area this year.

“I volunteered by installing smoke detectors and organizing emergency evacuation plans with residents in Woodland, California,” comment Norwood. “I was proud to be there representing AFSA and celebrating its partnership with the Red Cross. It was such a great experience that I plan to sign up again next year!”

For more information on how you can volunteer in 2020, visit SoundTheAlarm.org. Donations to the AFSA/Red Cross Sound the Alarm campaign can be made year-round at redcross.org/afsa-pub.

ABOUT THE AUTHOR: Rebecca Herring is the communications coordinator for the American Fire Sprinkler Association.

Previous What Does an Association Do for the Industry?
Next Home Sprinkler Week Raises Public Awareness