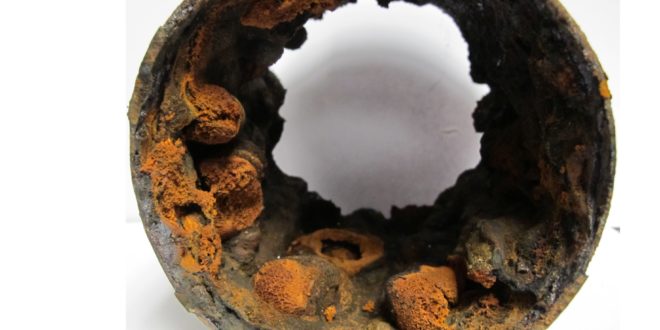 What is Contaminating My Fire Sprinkler System? 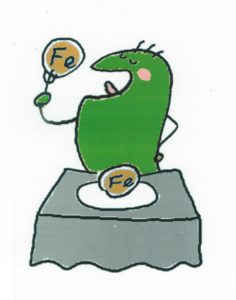 While microorganisms do not produce unique types of corrosion, they can accelerate corrosion reactions. Microbial action has been identified as a contributor to rapid corrosion of metals and alloys exposed to soils; seawater, distilled water, and freshwater; crude oil, hydrocarbon fuels, and process chemicals; and sewage. Many industries and infrastructure are affected by MIC, including fire protection systems.

MIC is a complex problem involving various aspects of materials science, electrochemistry, and microbiology that necessitates the involvement of scientists and engineers from various disciplines to take on this challenge. Also, the potentially large number of microbial types and activities involved challenges us to develop better mechanistic understandings of how these microorganisms and activities influence corrosion processes. The traditional understanding of MIC involves the formation of a biofilm that provides a niche for corrosive microorganisms to proliferate. Recent research has demonstrated that metal surfaces alone can produce redox, oxygen, and nutrient gradients without an established biofilm. Many treatment mitigation and monitoring strategies operate under the assumption that a substantial biofilm presence exists.

MIC is identified by evaluating the physical conditions, chemical composition of the water, microbiology, and metallurgy of the fire sprinkler system. The integration of this data is what ultimately determines the extent to which MIC may be contributing to the observed corrosion. Therefore, the techniques used to identify MIC are varied and cross-disciplinary and require expertise in materials, corrosion, microbiology, chemical treatment, and asset operations. Although microbiological conditions are only one piece of the MIC puzzle, the counting of viable bacteria has historically received the most emphasis. Serial dilution using liquid culture media, has been the predominant method used to identify viable bacteria.

The type (formulation) of the culture medium and incubation temperature determines the numbers and types of microorganisms that will grow. Since no culture medium can approximate the complexity of a natural environment, liquid culture provides favorable growth conditions for the natural microbiological population under ideal circumstances.

Since microorganisms are ubiquitous, and some are capable of life in even the most extreme environments, the greatest challenge is determining the degree to which MIC contributes to corrosion in conjunction with other relevant corrosion mechanisms. For example, biofilms that increase MIC susceptibility in fire sprinkler systems often occur where the fluid velocity is low enough to promote water accumulation and solid particle deposition. Deposit or sediment buildup create under deposit corrosion (UDC) mechanisms, where the concentration of cells will occur. Distinguishing the relative contributions of the biofilm and concentration of cells, for example, the corrosion threat assessment for MIC should be conducted to support the establishment of mitigation measures that are likely to have the greatest benefit.

Understanding the different bacteria species and the effects they have in promoting corrosion is an important first step in the assessment process. MIC can actively or passively attack the metal components of a fire sprinkler system. “Active” aerobic bacteria are a species that grow in the presence of free oxygen such as water. “Passive” anaerobic bacteria thrive in an oxygen depleted environment. Anaerobic bacteria is normally found under layers of biological waste that can form a gel-like mass.

This mass can extend over large areas, which can foster additional deposits that promote under-deposit corrosion. The resulting deposits will cause flow obstructions within fire sprinkler systems. Passive MIC can attack large areas and generally account for the greatest metal loss which leads to pinhole leaks in fire sprinkler systems. Proper identification of MIC bacteria requires biological testing for the specific species of bacteria.

The different types of bacteria associated with MIC in fire sprinkler systems are:

• Aerobes (AERO)–Aerobic bacteria grow and live in the presence of oxygen, and are a diverse group that include slime-formers and low nutrient bacteria. Aerobes are important to MIC because they produce extracellular polymers (“slime”) that bind cells to the surface and trap particulates, forming deposits. Aerobic slimes also regulate what permeates the deposit. Aerobes use oxygen, preventing it from reaching the underlying surface which creates an ideal site for anaerobic bacterial growth (such as APB and SRB) and involvement of these bacteria in MIC.

• Anaerobes (ANA) – There are both obligate anaerobes, which cannot grow in the presence of oxygen and may be killed by oxygen, and facultative anaerobes, which are capable of growing in the presence or absence of oxygen. Anaerobes includes lime and acid-formers and help create conditions under which other MIC-related microbes, such as sulfate- reducing bacteria, can flourish.

• Acid-producing bacteria (APB) – There are both obligate APB, which cannot grow in the presence of oxygen and may be killed by oxygen, and facultative APB, which are capable of growing in the presence or absence of oxygen. APB feed on organic nutrients and excrete organic acids that are very important in MIC and contribute to rapid and severe under-deposit acid attack/pitting. The presence of APB is the best indication of “mature” MIC communities and possibly advanced pitting corrosion.

• Low-nutrient or slime-producing bacteria generally produce the thickest slime formation under aerobic conditions. This species produces a variety of extracellular polysaccharide polymers. It is these long chain molecules which act as the foundation and cement for the formation of biofilm. The slime-like growth coating the inside of pipes is called the biofilm. The purpose of this slime layer appears to be protective. Under harsh environments (e.g., temperature changes) slime layers can get thicker. As the biofilm matures, aerobic bacteria creating the biomass produce metabolic by-products all the while consuming oxygen. This facilitates micro-environments underneath the biofilm which can then support the growth of anaerobic bacteria. The slime forming bacteria are an important part of the microbial influenced corrosion.

• Sulfate-reducing bacteria (SRB) is an aggressive group of anaerobic bacteria that generates hydrogen sulfide (H2S). SRBs can cause a number of significant problems for fire sprinkler systems and have been well documented as the most aggressive contributor of corrosion within fire sprinkler systems. SRB microorganism are difficult to detect because they are anaerobic in nature and grow deep down in biofilms (slimes) as part of a microbial community. The only means of removal of SRBs is replacement of the pipe or a chemical cleaning and secondary treatment of the system with bacterial and corrosion inhibitors. Removal of the nutrients and bacterial contamination is the only remediation option.

• Iron-related bacteria (IRB) are a species of bacteria that converts soluble iron ions (ferrous) to insoluble iron ions (ferric). IRB is very common due to the steel piping environment of a fire sprinkler system. This species of bacteria are identified as aerobic and anaerobic in nature. The reduction of oxygen in a fire sprinkler systems may limit the aerobic species development. The anaerobic species require a similar remediation option of pipe replacement or a chemical cleaning and treatment program to remove this corrosion threat.

There is a misconception in the fire sprinkler industry that the application of nitrogen inerting in wet systems will eliminate MIC. Nitrogen helps to dilute the available oxygen that may be available in the trapped air at the highest elevations of a fire sprinkler system. Nitrogen by itself does nothing to address the damaging effects of (UDC) under deposit corrosion or anaerobic bacteria such as SRB (sulfate-reducing bacteria).

Biocides or biostatic inhibitors are still the chemicals of choice when mitigating MIC; however, inhibitors usually need to be combined with a chemical cleaning program to enhance their effectiveness, especially if the biofilms and corrosion are already firmly established. Biostatic corrosion inhibitors for fire sprinkler systems have proven to be effective in controlling corrosion. Laboratory testing has confirmed that some low-toxicity film-forming corrosion inhibitors can inhibit MIC development.

Testing that simply addresses the reduction of microbial populations without addressing the corrosive changes in water quality is insufficient. To develop an effective mitigation program, it is necessary to have water analysis and metallurgical testing completed. Understanding the overall water quality and level of bacterial contamination is a critical first step in the corrosion mitigation process. Metallurgical analysis morphology corrosion patterns are utilized to confirm bacterial related corrosion damage. Once a mitigation program is selected, an effective monitoring and inspection programs can be developed to control microbiological growth, and reduce the corrosiveness of the environment inside the fire sprinkler systems.

ABOUT THE AUTHOR: Tim O’Leary is the president and CEO of Huguenot Laboratories. He has over 30 years of corrosion management experience in water treatment. He can be reached at Huguenot Laboratories by phone at (800) 228-3793 or by email at tim-oleary@huguenotlabs.com.