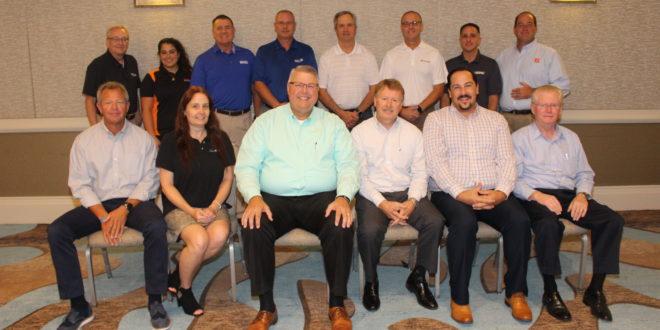 AFSA Manufacturer/Supplier Members Have a Voice

The American Fire Sprinkler Association (AFSA) Manufacturers/Suppliers (M/S) Council elected its officers October 4 at the AFSA38: Convention, Exhibition & Apprentice Competition in San Diego. Chris Stason of Victaulic Company in Temecula, California was elected as chair of the Council and Derek Allen of Core & Main in Hayward, California was confirmed as vice chair of the Council.

All members are anticipating a year of making a great difference on the Council. Knurek, who has served on the AFSA committees in the past, is especially thrilled to be a part of the M/S Council. “It has been many years since Lubrizol/BlazeMaster has been on the M/S Council, so I am very excited that we have made it back,” said Knurek. “I look forward to working closely with the M/S Council to further advance the fire sprinkler industry initiatives that progress the quality of our products, solutions, training, and increasing residential fire sprinkler requirements. AFSA is poised to do great things over the next few years and I am looking forward to being an integral part of it.”

“Being the Chair affords me the opportunity to give back to the industry and work with all the manufacturers for the betterment of the industry as a whole,” said Stason, who was elected to a two-year term as Council chair. “I think together with the new AFSA Board of Directors Chair Ted Wills and the new makeup of the M/S Council we look forward to two years of progress in tackling industry issues and opportunities.”

At the Council’s July 2019 meeting, Chuck Kitts announced that he will step down from serving on the Council as a representative of System Sensor. On behalf of the members of the Council, Immediate Past Chair Mike Dooley presented Kitts with a commemorative plaque at their October meeting in recognition of his nearly two decades of service on the M/S Council.

AFSA members are encouraged to contact M/S Council representatives with questions or ideas. If you are interested in becoming more involved with AFSA, the Council encourages you to do so! Consider investing in the future of your industry by getting more active; please also consider the time and financial commitment required to attend meetings and work on AFSA programs. The M/S Council will meet on these dates in 2020: January 22 – Westin Park Central, Dallas, Texas; April 22 – The Grand Hotel Golf Resort & Spa, Point Clear, Alabama; July 22 – Ritz-Carlton, Philadelphia, Pennsylvania; September 16 – Hilton Bonnet Creek, Orlando, Florida.

Previous Want to Learn Sprinkler System Layout?
Next Thank You for Your Support!