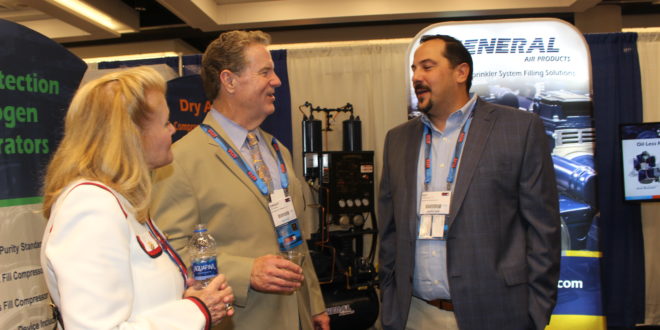 From left to right: Leah and Dwight Bateman visit with Fremont during AFSA38’s exhibition in San Diego.

The American Fire Sprinkler Association (AFSA) is proud to recognize those members who are celebrating milestone membership anniversaries. The member companies featured have belonged to AFSA for 15 or more years of continuous membership. Several members are celebrating milestone anniversaries in November and December including Associate Member General Air Products, in Exton, Pennsylvania. Ray Fremont, Jr., marketing manager of General Air, shares some of his favorite AFSA memories and things he’s learned within the fire protection industry.

How did you get involved in the fire sprinkler industry? General Air Products became involved in the fire sprinkler industry in the late 1950s. At the time we were an industrial design and buy/resell company. We designed and offered components for the boiler systems in many buildings in the Mid-Atlantic region. More and more an air compressor for a dry pipe sprinkler system would be called out in specifications and we offered a solution. Eventually, that component came our way so often we decided to manufacture a compressor specifically designed to work in a fire sprinkler application.

How did you get involved with AFSA? General Air has exhibited at AFSA’s convention for many years and I’ve regularly attended. As I got to know more members and what AFSA does for the industry, I became more involved in the association both on the local and national levels. I’m a member of our local Schuylkill Chapter and have presented seminars and training for chapter members. On a national level, I helped to establish AFSA’s NextGen Initiative (NGI), the workgroup for industry professionals aged 40 and under, and was very active in it until I “aged out” and earned mentor status. I’ve written articles for Sprinkler Age, was elected to the Manufacturers/Suppliers (M/S) Council in 2016-2017, and I’ve signed up to be a mentor in AFSA’s new Mentor Program.

What is your favorite or most used AFSA benefit? Our participation in the trade show each year is the aspect of AFSA that we make use of and look forward to each year. The AFSA Board and staff do an incredible job of facilitating a sense of community and purpose that is a privilege to take part in.

What’s the key ingredient to your success? The success of General Air Products can be boiled down to two ingredients—high-quality product and diligent customer service. The fire sprinkler industry is, in our estimation, different from other trades because of gravity of the end result. Sure, not getting hot water from a faucet or not getting power from an outlet is a problem—but a fire is an emergency. That is what drives our focus on quality and support, it drives our best customers to constantly get better at their trade and it drives the AFSA to develop the most effective curriculum—that is an industry and a community that we are proud to be a part of!