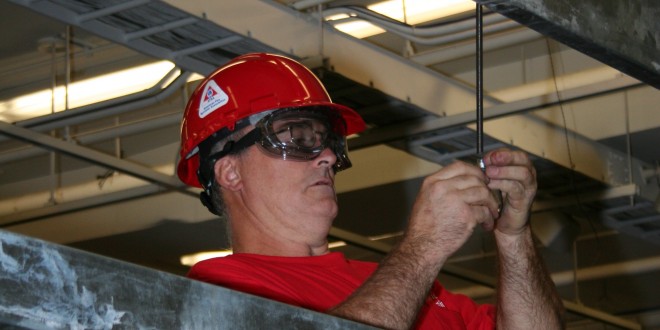 Where Are They Now?

Catching Up With Apprentice Competition Alumni

The American Fire Sprinkler Association’s (AFSA) National Apprentice Competition began in 1994 at the 13th Annual AFSA Convention & Exhibition in Fort Lauderdale, Florida. That year, for the first time ever, seven apprentice finalists representing member companies from across the country competed to become the champion of this national competition.

Their journey began much earlier, when these seven finalists were just a few of many contestants who first took a 70-question written test to determine who would represent each state in a regional competition. Next, state winners participated in another, longer written exam to decide who would represent each of the seven AFSA member regions at the national competition. Once at the national competition, each of the seven finalists took a three-hour written exam, and while hundreds of AFSA members and guests watched, they installed a mini fire sprinkler system. The installations were graded on accuracy, craftsmanship and safety. Questions for all tests were based on AFSA’s Training for Excellence apprenticeship training course.

Today, 22 years later, the process is still very similar. But the lives of those original competitors, and the ones who came after them, have changed a great deal. Where are some of the former contestants and champions? AFSA caught up with a few of them to see how the competition has affected their lives.

In 1994, the winner of the very first National Apprentice Competition was Martha Grazier, a sprinkler fitter apprentice with Advanced Fire Protection in Woodinville, Washington. “It was a great opportunity,” says Grazier. “The whole competition helped to boost my confidence, and with that confidence I was able to develop my career.” Grazier went on to advance within her company and become a designer and project manager, focusing primarily on mixed-use buildings. Her boss, Bill McKay of Advanced Fire Protection, still sings her praises to this day. “It was a great accomplishment,” says McKay. “We were all very proud of Martha.”

Kenneth (Ken) Danes of American Fire Protection, Nampa, Idaho, did not start out in the fire prot 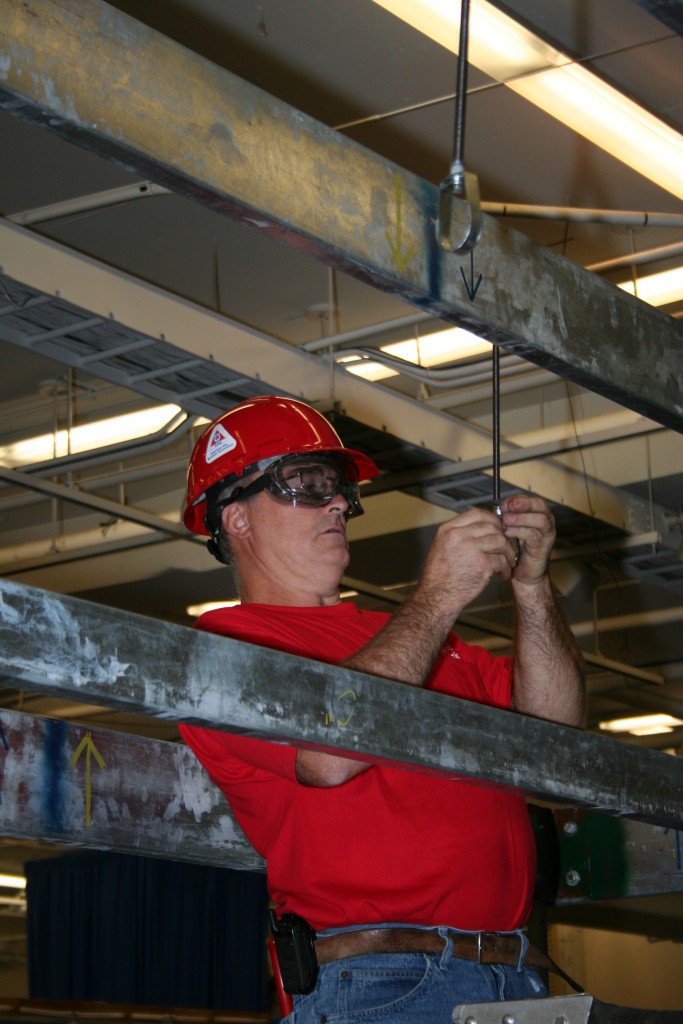 ection industry. In fact, it was his brother that started the company while Danes was serving in the military. After returning from service, Danes decided that it would be fun to work with his brother, and joined the company in June of 2006. He joined as an apprentice: running machine, hanging pipe and digging underground. In 2008, after two years as an apprentice, he entered AFSA’s National Apprentice Competition, and he won.

Danes believes that it was his varied experience that gave him an edge in the competition. “Because the company was small, I got exposed to everything we did in a very short time,” says Danes. “Some of the larger companies have people who do just underground, or just overhead, or just plastic. I had a wider breadth of experience because I had to do a little of everything.”

After winning the competition in 2008, Danes stayed with American Fire Protection, honing his craft and eventually advancing into a position as a designer. He plans to become NICET certified in the near future. When asked how winning the National Apprentice Competition may have shaped his career path, Danes says that it provided him with the impetus he needed to continue in the field and excel. “It gave me something to look back at and say ‘I accomplished this, so I can’t go downhill,’” says Danes. “I need to maintain the same kind of work ethic that won the competition.” 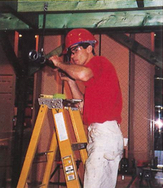 Rodney (Rod) DiBona of Rapid Fire Protection, Rapid City, South Dakota, was in high school when a friend’s father offered him a job in his fire sprinkler shop for five dollars an hour. “I think I set a speed record getting there, as that was almost double what I was making at the donut shop,” says DiBona.

Just five years later, DiBona went on to compete in the National Apprentice Competition, where he was a national finalist and had a blast. “[I] absolutely loved it,” DiBona says. “It drove me to learn anything and everything that I could about the industry. I highly recommend it to all apprentices and companies.”

Today, DiBona is vice president and part owner of Rapid Fire Protection, and serves on its board of directors. He also serves on the AFSA Board of Directors as its Region 3 Director, as well as on its Apprenticeship & Education, Membership, and Contractor’s Support & Advisory Committees. He is a NICET Level III Certified Engineering Technician in Water-Based Systems Layout. His goals for the future include training the next generation using the AFSA apprenticeship program as a tool. He is certainly accomplishing that goal; Rapid Fire has had 17 national finalists, three AFSA national winners and one ABC national apprentice winner. 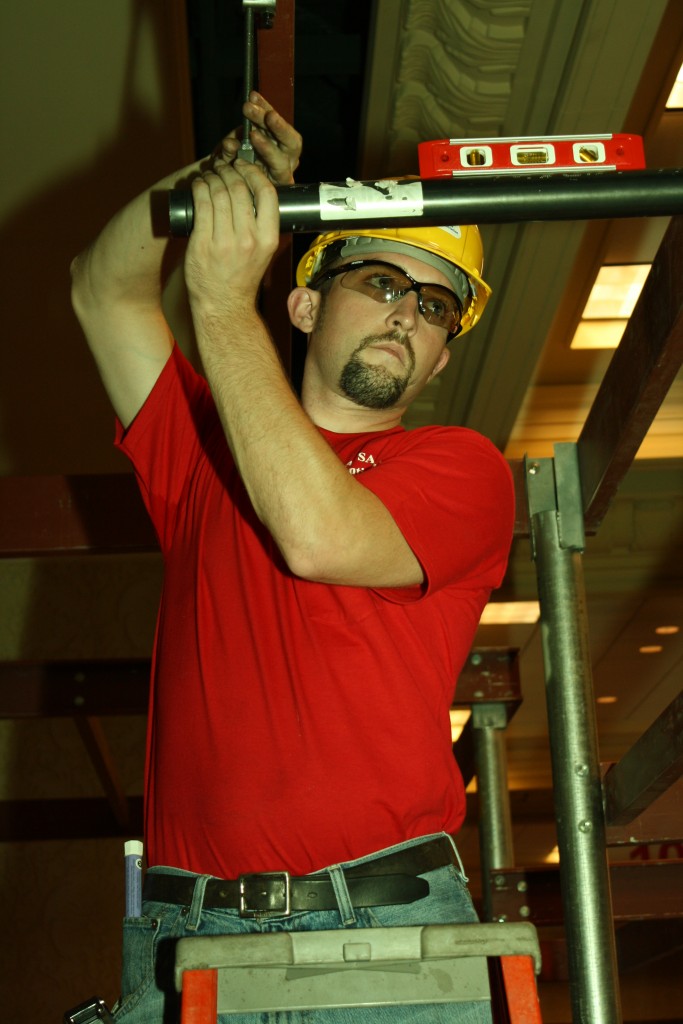 Joseph (Joe) Giguere of Rustic Fire Protection, Norton, Massachusetts, was studying biomedical engineering at the University of
Rhode Island in Kingston on a full academic scholarship when he was first introduced to the fire protection industry. He found himself dissatisfied with the career choices he had made thus far, dreading the long hours and little pay he would be facing as a biomedical engineer, when he went fishing with a childhood friend who was working for Rustic Fire Protection as an apprentice.  “I found it very enticing to work with my hands again,” says Giguere, “knowing that I would be building myself a great life with a better balance of work time versus personal time. That afternoon of fishing was definitely the pivotal moment when I decided to leave college and pursue a career in the fire sprinkler industry.”

Four years into his apprenticeship, Giguere decided to try his hand at the AFSA National Apprentice Competition, and jumped at the chance to go to San Diego and compete. “The competition itself was fantastic,” says Giguere. “All of the competitors were extremely friendly and we all stuck together throughout the experience. […] The one thing that really stuck with me from that experience was the overwhelming sense of camaraderie that I saw shared across our industry. Competitive suppliers, manufacturers and contractors really all came together as one community for this event and that was really special to see.”

re protection specialist, because he had some previous experience installing halon systems. After ending his service in the Air Force, while trying to decide what career move to make next, he was passed on the street one day by a sprinkler truck. “I wrote the number down, called and got a job,” Koopman laughs, “Now I tell all my friends that are still firefighters I have a better response time than you ever will!”

Koopman spent three years working for Southeast Fire Protection before deciding to compete in the AFSA National Apprentice Competition. After coming out the champion, Koopman only has great things to say about the program. “I believe any time you are learning it contributes to you success,” says Koopman. “It was a good experience that I enjoyed tremendously. I recommend it to everyone one that is in the program.”

Today, Koopman works as a project designer at Southeast Fire Protection, having spent over 20 years with the company. His goal for the immediate future is to obtain his NICET IV and CFPS certifications. 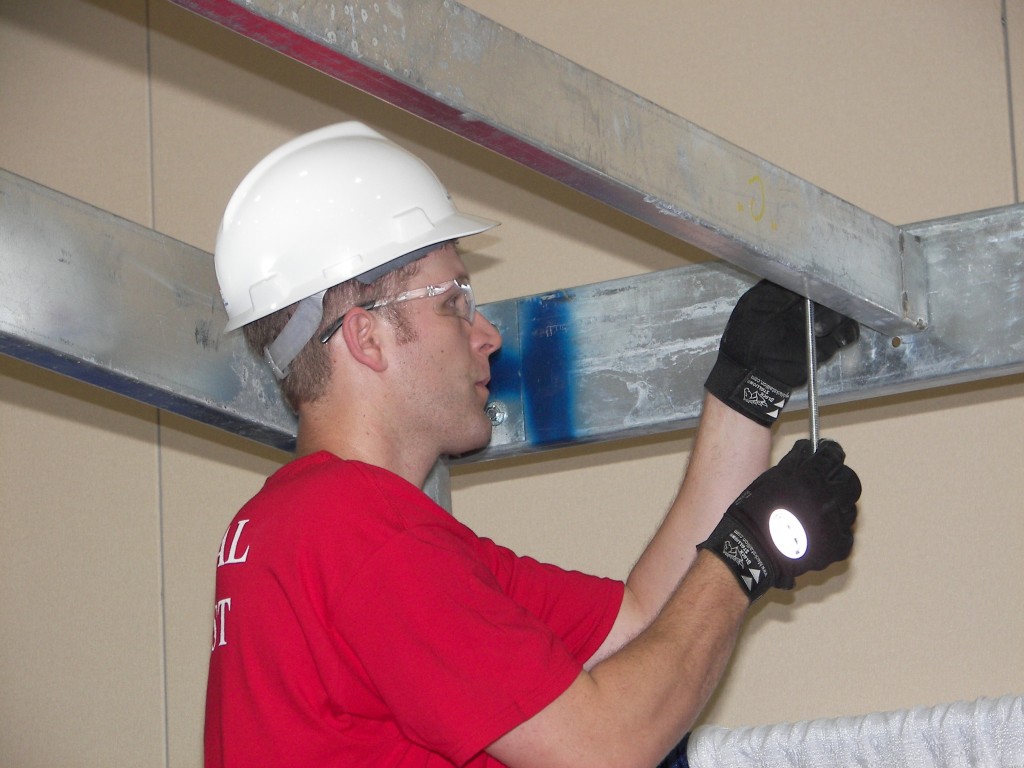 Barnabas (B.J.) Newlin of Aegis Fire Protection, Olathe, Kansas, got into the fire sprinkler industry as a way to pay the bills. It was the first job in construction that he had ever held, and until he began in the industry, he had no concept of how fire sprinklers worked or how they were installed. But he found that he loved it, and just a year later he competed in the 2003 AFSA National Apprentice Competition, finishing in third place as a national finalist. But he wasn’t stopping there; in 2006, Newlin entered the competition again, this time achieving the honor of second place.  “I had a great experience when I was competing,” says Newlin. “I would most definitely recommend it to others.  For apprentices, it is a great chance to see other aspects of the industry and for employers I think it is a good opportunity to inspire your apprentices to bigger and better things.”

Today, Newlin is the service manager at Aegis Fire Protection in the Kansas City area. He hopes to one day run his own branch, and someday his own fire sprinkler company. Newlin is convinced that competing in the National Apprentice Competition contributed to his current success by inspiring him to strive for more within the industry. “Being at the convention showed me what was possible,” Newlin says, “as well as the work it would take to earn those opportunities.” 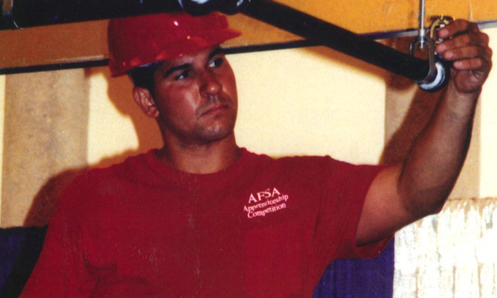 protection professionals. His grandfather, Emmanuel Russo, was a business agent for pipe fitters, and signed the first charter for pipe fitters for Connecticut and Western Massachusetts. When Russo was a child he helped with the family business, and continued to do so even after graduating with a bachelor of science in finance from Quinnipiac University in Hamden, Connecticut.

Russo had been working in the industry as an apprentice for four years before he decided to compete in AFSA’s National Apprentice Competition. He greatly enjoyed the experience, and came out the champion that year.  “I absolutely feel that my participation in the competition contributed to my success in the fire protection industry,” says Russo.

“My long-term goals are to continue in the fire protection industry, running a successful three-generation family business,” says Russo. “To make the public aware of how truly beneficial fire sprinklers are in saving lives, and to continue supporting AFSA in promotion and public awareness, of fire sprinklers.” Russo would like to thank his father, Richard A. Russo Sr., and his friend and mentor Bob Hollis, without whom he would not be where he is today.

This September, seven new finalists will make their way to Nashville to try their luck at becoming the next AFSA National Apprentice Competition Champion. Local competitions will be held June 11, and will ultimately determine the top seven national finalists, who will receive an expense-paid trip to Nashville to compete in the AFSA National Apprentice Competition and attend AFSA’s convention as its honorable guests, as well as a complimentary registration for their employer to attend, tools, and cash prizes. After an afternoon of fierce competition on Saturday, September 17, one apprentice will emerge as the best-of-the-best: AFSA’s 2016 Apprentice of the Year. Think you have what it takes? Submit an application form today (see page 36 of this issue) or enter online at firesprinkler.org.