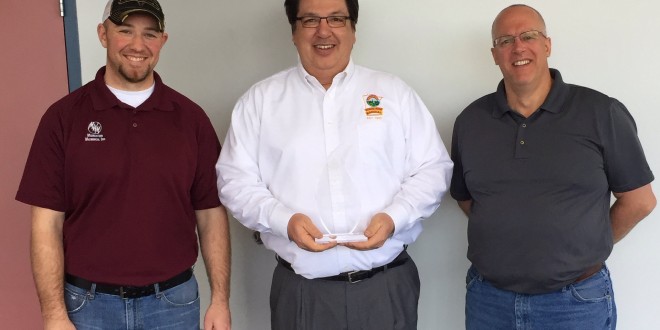 On Friday, March 27, Dan Kaiser, deputy state fire marshal of the State of Minnesota, received the “Fire Sprinklers Save Lives Award” from the North Central Chapter of the American Fire Sprinkler Association (AFSA). He was honored with the presentation of the award at the chapter’s annual fire sprinkler fitter training in St. Cloud, Minnesota. AFSA’s North Central Chapter covers the states of North Dakota, South Dakota, Minnesota, and Wisconsin.

Kaiser has been involved in the fire protection industry since 1980. In his role as a deputy state fire marshal, he has conducted thousands of fire sprinkler system plan reviews and inspections. In his efforts to increase competency in the fire sprinkler industry, he has also reached numerous people through training and education seminars to fire sprinkler installers, system designers, engineers, code and building officials, and fire department personnel. In addition, Dan has written a number of articles and authors the Minnesota State Fire Marshal’s “Quick Response” newsletter.

Dan holds a Level IV certification from the National Institute for Certification in Engineering Technologies (NICET) in Fire Sprinkler Layout. He represents the International Fire Marshals Association as an alternate on the NFPA 13 Sprinkler System Discharge Technical Committee. Dan has served as a subject matter expert for NICET’s water-based systems layout certification program, and he was appointed by Minnesota’s governor to serve on the Minnesota Fire Protection Advisory Council.

Jared Van Gammeren of AFSA contractor member, Midwestern Mechanical of Sioux Falls, S.D., presented the award. Van Gammeren cited Dan’s many efforts to the fire sprinkler industry. He noted, “I am proud to present Dan this Fire Sprinklers Save Lives Award. His many years of dedication and professionalism have elevated the public’s awareness in regard to the importance of our life-saving industry.”

EDITOR’S NOTE: AFSA created the Fire Sprinklers Save Lives award in 1988 to recognize individuals outside the fire sprinkler industry who help dispel negative myths about fire sprinklers by generating public awareness of the truth about this life-saving technology.  A deserving recipient of this award, Dan Kaiser joins a distinguished list of fire marshals, building officials, television personalities, and others who have embraced fire sprinkler technology and become advocates of its use in life safety.  To nominate someone from your area, simply send a letter to AFSA, Fire Sprinkler Public Education & Awareness Committee, 12750 Merit Drive, Suite 350, Dallas, TX 75251, or email nduvall@firesprinkler.org with the subject line, “Fire Sprinklers Save Lives award.” 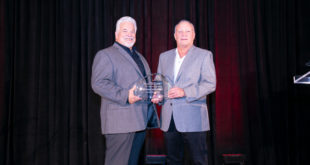