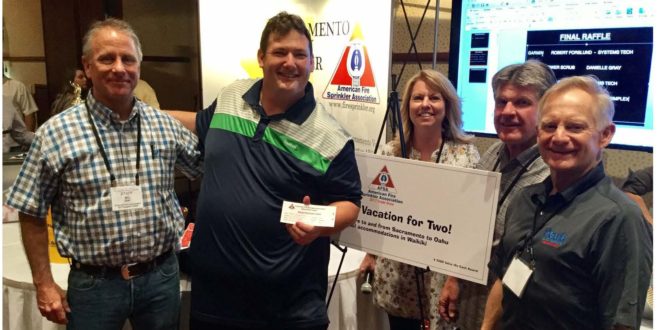 It’s the Biggest Little Trade Show in the West!

The Sacramento Valley Chapter of the American Fire Sprinkler Association (AFSA) hosted a hugely successful trade show in 2017 and is gearing up to do it all again in March 2018. These shows have quickly established themselves as the region’s premier event for professionals in the fire sprinkler industry.

Highlights from the 2017 show include boom lifts displayed by American Scissor Lift, an array of fantastic raffle prizes, and the opportunity to connect and network among individuals in our industry who represent a variety of roles. Even more exciting events, displays, and prizes are expected this year!

Last year’s show had an attendance of over 700 with 57 booths. This year’s show promises to be even more well attended and continue to serve as an invaluable networking opportunity for all. Companies from all over the United States, and from as far away as Canada exhibited their products and services last year.

Jon Swett, of Patterson Pump, says, “Overall, the trade show was a success for all the exhibitors to reunite with many of their customers, engineers, and fire departments. We will always be there to show our wares going forward.”

He continues: “It is a perfect place to be when your customers come to you all at once, rather than dropping by all their offices/shops for the same outcome. We had many one-on-one conversations with many customers and it was great PR for all.”

With such a successful turnout last year, it’s safe to say that there is even more planned for this year’s show. Each year the show draws new attendees and exhibitors. In 2017 it was ServiceTrade’s inaugural year participating, and they definitely plan to come back this year.

“[2017] was our first time attending the Sacramento Valley Chapter Trade Show and we plan to attend every year going forward,” states Tim Spink with ServiceTrade. “It was a great opportunity for ServiceTrade to talk with current customers and share our modern technology with companies interested in maximizing service and inspections.”

Sigma is another exhibitor who has been at the show from the beginning, and for good reason. Ed Eichmann of the company expressed his enthusiasm and intention to return, “The exposure that SIGMA Piping Products is able to obtain from the Sacramento Valley AFSA Trade Show is one of the best. The quantity and quality of the attendees attracted to this show is the main reason we’ve supported since its inception. Time well spent at an industry show!”

While the draw of the raffle prizes, hors-d’oeuvres, and product education entices many to attend the annual show, it’s the opportunity to connect with others in the fire sprinkler industry that makes the Sacramento Valley Chapter’s annual trade show what Will Mercado of Anvil International refers to as, “the Biggest Little Trade Show in the West.”

For more information regarding exhibiting, sponsoring, or attending the trade show and local chapter membership, contact Executive Director Paulene Norwood by phone at (916) 296-0635, email at paulenesacvalleyafsa@gmail.com, or visit the chapter’s website at sacvalleyafsa.org.

ABOUT THE AUTHOR: Sara Ballantine is a website associate with the AFSA Sacramento Valley Chapter.