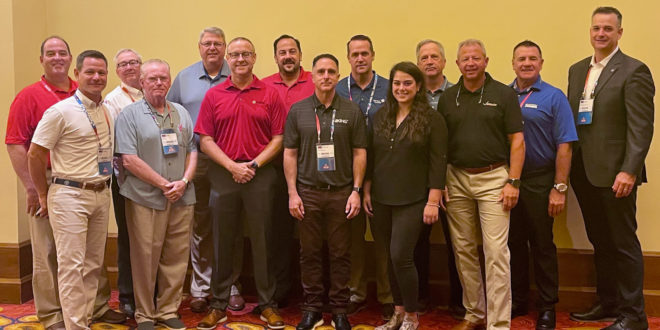 Members of the M/S Council met during AFSA40.

The American Fire Sprinkler Association (AFSA) Manufacturers/Suppliers (M/S) Council elected its 2022 officers in August 2021 and was pleased to announce them during their annual meeting in September 2021, which was held at AFSA40: Convention, Exhibition & Apprentice Competition in San Antonio, Texas. Derek Allen of Core & Main in Hayward, California, will serve as the Chair of the Council, and Bill Phair of Ferguson Fire & Fabrication in Passaic, New Jersey, will serve as vice chair.

Schechinger expresses his thanks for being elected and excitement to serve in his upcoming term, saying, “Thank you – I am very excited for the opportunity to serve on this Council. AFSA plays a vital role in the success of expanding the use of fire sprinkler systems, which, as we know, saves lives every day. The passion we all have for this association is evident with the M/S Council, and my hope is that I can continue to contribute to the ongoing work that is being done to expand the membership and participation of this group.”

Newly elected council member Lainey Liotta looks forward to serving on the Council and bringing a different perspective, saying, “It is truly an honor to have been elected to serve on AFSA’s Manufacturers & Suppliers Council, representing Lubrizol. As the only woman and ‘NextGen-er’ on the Council, I hope to offer a fresh perspective and bring forward innovative ideas that will further build upon the Council’s success in supporting training opportunities and promoting the fire sprinkler industry as a whole.”

In fact, all members are anticipating a year of making a great difference on the Council. With a new year comes new opportunities, and the Council couldn’t be more enthusiastic for what the upcoming year will bring for AFSA. The Council will work year-round to continue to facilitate training, leadership, and membership initiatives, goals, and objectives to make 2022 another year for the history books.

AFSA members are encouraged to contact Council representatives with questions or ideas. If you are interested in becoming more involved with AFSA, consider investing in the future of your industry. Please also consider the time and financial commitment required to attend meetings and work on AFSA programs. The M/S Council will meet on these dates in 2022: January 25-27 in Dallas, Texas; April 24-26 in Scottsdale, Arizona; July 12-14 in Annapolis, Maryland; and October 14-19 in Las Vegas, Nevada at AFSA41. Members interested in serving on the Council should contact M/S Council staff liaison AFSA’s Vice President of Engineering & Technical Services John August Denhardt, P.E., FSFPE at jdenhardt@firesprinkler.org. n