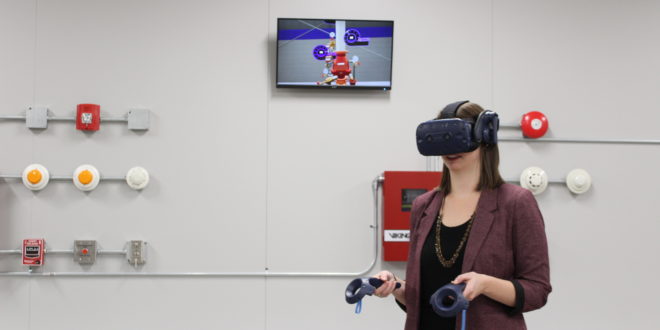 Technology to Roar Forward in the Twenties

“I was promised we’d have flying cars by now!”

Everyone has heard that statement, or maybe even exclaimed it aloud. As the third decade of the 21st century begins, it is easy to feel like the technology promised by Hollywood is still far off. Today the average American holds in his pocket more computing power than the supercomputers of the 1980s. But in many ways, our way of life doesn’t seem that different.

In the sprinkler industry, designers can feel the same way. Design software like AutoSPRINK and SprinkCAD have advanced the design process in ways that may have seemed impossible 40 years ago. The ability to now design in 3D with Revit® tools is further improving the process and opening the door to greater collaboration between the trades through Building Information Management (BIM). Yet the idea that someday designers will be able to virtually walk through a building before it exists can still feel a bit like a science fiction movie.

AR and VR Adoption in the Construction Industry

Virtual reality (VR)1 allows a user to be immersed in a digital world which can be interacted with using controllers. This can be especially useful if the VR scenario is somewhere hard to reach-—or somewhere that doesn’t yet exist! “We joke about designing in VR,” says Marcus Cutshaw, a design manager with Houston-Based Koetter Fire Protection. “I wouldn’t be surprised if we get to the point of seeing the building all around us as we design a system. Will it happen in this decade? I’m not sure.”

For many fire protection designers, the idea of designing in 3D virtual space can seem both within grasp and miles away. It’s no secret that the construction industry is one of the slowest to adopt new forms of technology. In fact, a 2015 report from McKinsey Global Institute reported that the level of digitalization index for the construction industry was the lowest out of 22 industries. While technologies like BIM, virtual reality, and augmented reality (AR)2 are exploding in other industries, construction professionals can find themselves wondering when those advancements will finally become a standard in their occupations.

According to Kenneth Research, the global augmented and virtual reality market is expected to grow to nearly $510 billion by the year 2025, with the highest share being in North America. Yet, meaningful adoption of these technologies in the construction industry is not within view for most contractors.

Perhaps it is a problem of perspective and exposure. Despite significant growth over the past five years, most people still associate virtual reality and augmented reality with entertainment uses such as movies video games, and amusement parks. To the extent that they have seen VR and AR demonstrations in a professional setting, these technologies—while interesting and impressive—can seem like novelties with minimal day-to-day application.

Training and education are areas that show significant promise for the adoption of AR and VR technologies across professional industries. The health care industry was quick to adopt the use of VR technology for use in surgical training. The U.S. military has also found use in VR simulations—similar to video games—to train today’s combat troops. And online retailers have found great success by using AR so that, for example, a purchaser can see what a piece of furniture will look like in her living room using just her smartphone camera.

In the sprinkler industry, VR technology is already being used for training purposes. For example, virtual reality programs designed by The Viking Corporation allow a user to virtually explore different systems and learn how to trip, reset, and inspect a variety of valves. Technology is changing the way that designers get training as well.

“I like to ask questions and I’m not interested in sitting in a training class for weeks,” said Conner Carberry, a sprinkler designer with American Fire Systems, Houston, Texas. With 15 years’ experience in the industry, mostly in design, he learned the basics by sitting at his father’s drafting table doing hand calculations. Training developers are now in the position to imagine virtual reality training environments where lessons on these important foundational techniques can be supplemented by an immersive experience inside the building, where obstructions and water flow issues can be immediately identified, analyzed, and corrected.

Next Steps for BIM, Internet of Things, and Digital Twins

One of the most prominent hopes for technologies like AR and VR in the world of sprinkler design is an integration of virtual reality and BIM which would support immersive design, engineering reviews, and construction progress meetings.

BIM is a process used to create intelligent 3D models to facilitate document management, coordination, and simulation of a building or infrastructure project. While this exciting technology promises to improve coordination between trades and lead to a shortened installation time, many sprinkler contractors have found the transition to be rather burdensome.

Carberry thinks that the next 10 years will show steady growth in the adoption of BIM in the fire protection industry, and hopes that some of the challenges designers face now will be alleviated. “For a big project, it’s not as efficient as people would hope it is. Because of that, we aren’t being pushed hard to use it yet. But I think that will gradually change. Over the years, someone will really start figuring out how to hold BIM accountable, making it easier to keep up with the increasing speed of construction projects.”

Perhaps the key to BIM accountability lies in continued adoption of two additional, connected digital tools: digital twins3 and Internet of Things (IoT)4 technology. A digital twin is a continually updated and accurate representation of an asset, building, or system. As building owners and facilities managers become more familiar with the idea of a digital twin and more comfortable with the prospect of using one, the demand for these systems is likely to soar. With this evolution, contractors across the construction industry will have no choice but to implement BIM for their large projects.

Additionally, the expansion of IoT technology will continue in all segments of the construction industry. IoT sensor technology and cloud computing will lead to more efficient systems that can use artificial intelligence to self-diagnose issues before they occur, evaluate cause and effect, and even implement solutions. Learning how these systems work, and effectively planning fire protection for them will require sprinkler designers to not only adapt to these evolving technologies but also to plan for future advancements. Once a system is in place, it needs to stay relevant throughout the life of the building (and its digital twin).

Though it sometimes seems the future is years away, professionals across the sprinkler industry are ready and eager to adopt new technologies that will profoundly affect the way we imagine, design, install, and service fire protection systems. “When I started a decade ago, some of the more seasoned designers were still doing calculations by hand,” says Cutshaw. “The next decade will definitely bring even more changes and we need to be ready to take on that challenge.”

REFERENCES:
1. Virtual Reality: Virtual reality (VR) allows a user to be immersed in a digital world which can be interacted with using controllers. Consider a program that allows medical students to virtually perform a surgical procedure.

2. Augmented Reality: Augmented reality (AR) is the technology that overlays digital information onto the user’s view of the real world. Consumers are becoming comfortable with this type of technology which can place an image of a piece of furniture inside the buyer’s actual living room.

3. Digital Twin: A digital twin is a virtual model of a building, process, or system. Building managers can use these twins to monitor systems and identify issues before they arise.

4. Internet of Things (IoT): system of interrelated computing devices, mechanical and digital machines, objects, animals or people that are provided with unique identifiers and the ability to transfer data over a network without requiring human-to-human or human-to-computer interaction.

ABOUT THE AUTHOR: Nancy Houghton is director of marketing for Viking Group, Inc. and serves on the AFSA NextGen Initiative Committee. She can be reached via email at  nhoughton@vikingcorp.com.

Previous Participate in Home Fire Sprinkler Week 2020!
Next How to Get Involved in the NFPA Process