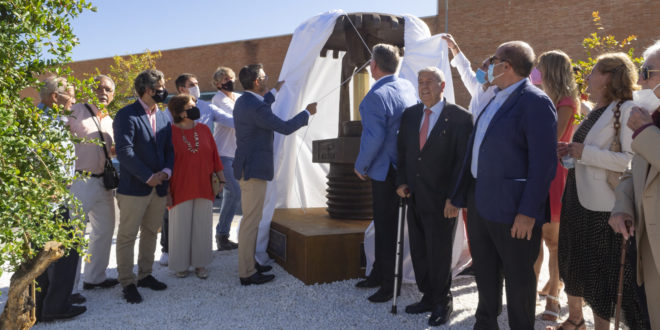 In September, the monument was unveiled with many city officials in attendance.

Emilio Rodriguez, owner of PACISA (Protección Automática Contra Incendios S.A.) in Alcobendas, Spain, has been passionate about fire protection for over 55 years. His company is an international contractor member of the American Fire Sprinkler Association (AFSA) and recently financed a unique project to honor the automatic fire sprinkler and increase public awareness about its benefits.

The idea of erecting a sprinkler monument began 15 years ago, in 2006. A new roundabout was required to access the industrial area where PACISA is located. Local Authorities required the company to donate a portion of its premises (approximately 6,000 ft2) to create the roundabout.

“Our company agreed to this altruistic collaboration in exchange for having the possibility of naming this roundabout [or ‘plaza’ in Spanish] as Plaza del Sprinkler,” comments Rodriguez. “We also asked permission to install a monument honoring Henry S. Parmelee and featuring an automatic sprinkler.”

He continues: “The authorities said then that it could be a possibility in the ‘near future,’ but I can hardly believe that ‘near future’ meant 15 years later!”

Rodriguez was persistent, reminding every newly elected mayor about the agreement and continuing his company’s commitment to the city. “Over the last few years, PACISA has been deeply involved with the city of Alcobendas, supporting local sports events and even sponsoring the city’s female basketball team.”

Finally, in June of this year, Rodriguez received written authorization to proceed. PACISA worked with Sculptor Anselmo Iglesias Poli (http://www.anse.space) to make the long-time dream of the monument come true. The project was financed mainly by PACISA.

“We asked the top sprinkler manufacturers to use one of their models for the monument, and Viking agreed,” notes Rodriguez. “Poli created a bronze-casted piece of an upright sprinkler head, over 6.5-ft high and weighing 2,200 lbs, onto a Corten steel base, turning our dream into reality.”

The monument was unveiled on September 17, 2021, by Emilio Rodriguez, CEO of PACISA, and Rafael Sanchez, mayor of Alcobendas, on the newly named Plaza del Sprinkler roundabout. The “super sprinkler” is supported on a steel-based frame with a plaque affixed that reads: “SPRINKLER AUTOMÁTICO HENRY S. PARMELEE 1874” as the main intention is to honor the first patented automatic sprinkler.

“As far as we know, this is the first monument in the world to recognize this most efficient device on fire protection, and we at PACISA, after 46 years of total dedication to sprinkler installation, are indeed very proud of this milestone,” summarizes Rodriguez.

“I don’t know whether everyone in the United States knows what an automatic sprinkler is, but certainly in Spain the answer is no, they don’t,” he says. “To help educate everyone, we have fixed an explanatory plate that anyone can read a brief explanation of what the monument is, in English and Spanish. Furthermore, our city hall’s Culture Department will incorporate a visit to this place as part of its cultural routes.”

Alcobendas is the Spain’s third-largest business city, only after Madrid and Barcelona, and is the Spanish headquarters for companies such as British Petroleum, Cisco, Ford, Galp, Lilly, Mercedes, PACISA, Pfizer, Samsung, and Volkswagen.

“The monument is beautiful, and we are jealous that it was created in Spain. I would love to be driving past it here in the United States each day!” comments AFSA President Bob Caputo, CFPS. “We are grateful for PACISA’s dedication to protecting the world from the devastation of fire and finding a unique way to achieve public awareness of automatic fire sprinklers.”

Undoubtedly, the residents of Alcobendas are noticing the new plaza and monument and will learn about the benefits of fire sprinklers. Kudos to this forward-thinking contractor!