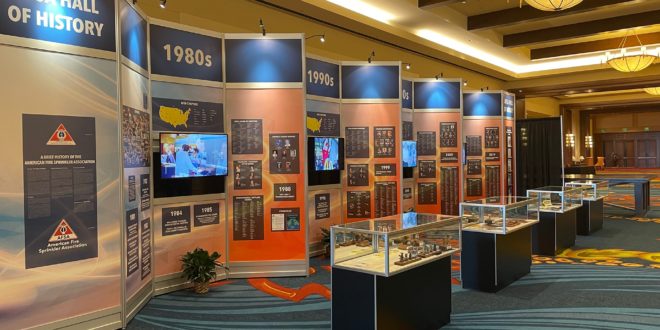 AFSA unveiled its Hall of History to celebrate its 40th anniversary. The display featured videos and memorabilia from the past four decades.

AFSA40 was a Texas-Sized Success!

“AFSA40 drew a crowd that rivaled 2019, our last convention before COVID hit,” comments AFSA President Bob Caputo. “We were ecstatic to welcome everyone back in person to America’s largest fire sprinkler industry event!”

The convention began with a golf tournament on Saturday, September 18, held at the Canyons Course of TPC San Antonio. There were 128 participants in the tournament, and prizes were awarded to the teams that took first place, second place, third place, and last place, as well as to the man and woman with the longest drive, straightest drive, and closest to the pin.

The day rounded out with an AFSA40 Opening Party at the River Bend Pavilion featuring live music by London Calling, a nine-piece Austin band; dancing, outdoor games; and a buffet-style barbeque dinner.

Sunday was a day full of learning and earning education credits at AFSA40 seminars. New this year, AFSA offered some of the sessions virtually.  Fifty-one registrants took advantage of these offerings over a four-day period.

Many attendees also took time Sunday afternoon to explore Texas Hill Country wineries during AFSA’s Fredericksburg Wine Tour. The evening featured an NGI social hour for all AFSA40 attendees to mix and mingle with professionals under 40 interested in networking with peers and mentors.

Monday offered more seminars followed by the general session, where attendees celebrated four decades of dedication to merit shop fire protection contractors and the commitment to saving lives and protecting properties from fire. AFSA 2019-2021 Chair of the Board Ted Wills presented the 2021 Henry S. Parmelee Award to George DiMatteo, president of Ferguson Fire & Fabrication, who has been dedicated to the fire protection industry and its members for over 40 years. In addition, 2021 Fire Sprinkler Advocate of the Year Butch Browning, Louisiana State Fire Marshal, was honored for his commitment to the fire sprinkler industry. Finally, Scott Cox, co-owner and president of Cox Fire Protection, Tampa, Florida, received AFSA’s 2021 Young Professional of the Year award for his service to the next generation of industry leaders on local and national levels. Attendees were then invited to the Exhibition Grand Opening Reception for a first look at this year’s exhibiting companies and to enjoy heavy hors d’oeuvres and cocktails.

On Tuesday, the seminars continued for a final day of learning and earning CEUs and CPDs. To view and print AFSA40 certificates, attendees must sign in to the Attendee Services Center and complete evaluations from the seminars they attended. If all the seminars aren’t listed, email AFSA’s Education & Meeting Services Department at education@firesprinkler.org.

The exhibits opened again on Tuesday afternoon with great attendance. Four hundred exhibitors from 87 exhibiting companies took over the hall, and attendees enjoyed learning about new products and services for the fire sprinkler industry and networking with fellow industry professionals. During the exhibition, the nation’s top seven fire sprinkler fitter apprentices, from the 150 apprentices who entered this year’s contest, installed mini-sprinkler systems for the enthusiastic crowd.

“This year’s convention was a true celebration of the fire sprinkler industry coming together for AFSA’s 40th anniversary,” comments Marlene Garrett, AFSA senior director of meeting & education services. “We were so happy to welcome everyone back and so excited by the turnout! We can’t wait to do this again next year.”

A Sure Bet in Vegas

Want to join in on the fun next year? Mark your calendars for AFSA41: Convention, Exhibition & Apprentice Competition October 15-19, 2022, at the Bellagio Las Vegas. For more information on this annual event, visit firesprinkler.org/AFSA40. To view additional photos of the action, visit AFSA’s Flickr photo page at flickr.com/afsa.