A Look Back at Four Decades of Serving Members

This year, the American Fire Sprinkler Association (AFSA) will celebrate at its 40th Annual Convention & Exhibition at the JW Marriott Hill Country Resort & Spa in San Antonio, Texas! With such a milestone anniversary comes the opportunity to reflect on how far the association has come in 40 years. In this issue, Sprinkler Age looks back on highlights of the past four decades and looks toward the next 40 years.

While AFSA was born in 1981, the seeds for its foundation were planted in the ‘70s. As reported in Fire Protection Contractor (FPC) magazine article “Roots: A Brief History of The American Fire Sprinkler Association” (September 1985), in the fall of 1972, Ed Smith started a non-union company, Home Fire Sprinkler, Inc., and interest in open shop construction began. Non-union contractor membership was explored for the National Automatic Sprinkler & Fire Control Association [the precursor to the National Fire Sprinkler Association—NFSA] for many years, with no results. In 1980, Smith tested interest in open-shop training within the industry by placing an ad in FPC magazine. The first ad was run in May of 1980:

Owners of Merit/Open Shop Sprinkler Engineering and Contracting Firms interested in sharing and exploring the possibilities of organizing a National Independent Automatic Sprinkler Contractor’s Association write: Box “J,” c/o The Fire Protection Contractor, [old address omitted]. All inquiries will be held in strict confidence. Inquiries are requested from owners only.

Interested parties met across the United States, culminating with a meeting during the 1981 National Fire Protection Association (NFPA) Annual Meeting in Dallas where the newly formed Independent Sprinkler Training Committee (ISTC) established a budget to underwrite the cost for a national apprentice training program for non-union fire sprinkler contractors. On September 16, 1981, the ISTC changed its name, and AFSA was born. 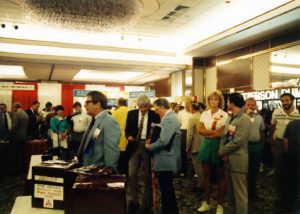 Joe Mulrine was named the association’s first executive director (a staff position now known as “president”) and set up headquarters in New Haven, Connecticut. The staff worked to receive permission from the Ministry of Education in Ontario to utilize the Canadian Fire Sprinkler Fitter Correspondence courses to train fitters in the United States. On November 17, 1981, the AFSA National Apprenticeship and Training Standards were submitted to the National Bureau of Training in Washington, D.C., for approval. On January 7, 1982, these standards were granted approval and issued the National Registration number N-92021. The first batch of apprentice correspondence courses, officially titled, Automatic Sprinkler Protection: Basic Training Series, was made available for sale shortly thereafter. It was official: AFSA was a training association.

The first annual conference (convention) was held in Nashville in 1982, and 128 industry members attended. The following year, Frank Riseden became the second executive director, a small staff was hired, and the association’s headquarters were moved to Dallas, Texas, where they remain today. During this timeframe, nationwide seminars and the first designer series of correspondence courses were also introduced.

AFSA’s second President, Steve Muncy, who served from 1992-2016, led the association into the world of technology, helping to create the association’s first website, membership database, and email system in 1995. The following year, AFSA’s SprinklerForum was introduced, a first-of-its-kind-in-the-industry email-based discussion forum still in use today. AFSA also sought to educate others outside of the fire sprinkler industry. It announced the association’s first annual national sprinkler essay contest during the 1996-97 school year, with the goal of educating high school seniors about the life-saving benefit of sprinklers. Association leaders also joined forces with NFSA and NFPA to create the Home Fire Sprinkler Coalition (HFSC) as a collective voice to promote residential sprinklers.

In 2008, AFSA made its presence on social media known with Facebook, LinkedIn, Twitter, YouTube pages. In 2009, Sprinkler Age began publishing a digital edition, complementing its long-standing print publication. AFSA’s High School Scholarship Contest expanded to an online presence with afsascholarship.org in 2006 and added a Second Chance Scholarship Contest three years later. This contest seeks to reach individuals who have already graduated from high school or earned a GED. Those seeking to pursue a college undergraduate or graduate degree or trade school education—including returning military, parents returning to the workforce, etc.—are encouraged to enter.

AFSA members founded its young professional group, the NextGen Initiative, in 2014 to engage and develop professionals 40 and under in the industry. AFSA added to its online presence in 2019 with the creation of a Flickr account in 2010, followed by Instagram in 2016. In 2015, SprinklerAge.com, a blog dedicated to the association’s premier publication. AFSA reached out to members via new mediums, including e-newsletters such as Tech Update, Education News, and ITM Connection.

AFSA is constantly seeking to grow and improve its services to better serve our members as it looks toward the next 40 years. “I am so very excited to be a part of the AFSA staff looking ahead at our bright future,” says AFSA President Bob Caputo, CFPS. “We have assembled the industry’s best-in-class technical services department to assist our members with codes and services as an extension of your design and estimating staff.  We are introducing great new training programs, based on feedback from the members. Our future together is truly bright as we endeavor to deliver on the AFSA mission to support and be the voice of the merit shop fire sprinkler contractor. Thank you for your faith, trust, and membership in AFSA… together, we are stronger.”

Over the past 40 years, AFSA has grown from a handful of dedicated volunteers who saw an opportunity to better the industry through collaboration and education to a nationally recognized organization with over 1,000 member companies, 31 local chapters, and two state affiliates. Throughout the years, the leaders of yesterday and today have kept the association on a successful path with a bright horizon ahead.

We congratulate our founding fathers for their hard work and look forward to working with future generations to secure AFSA’s place in history as the fire sprinkler industry leader! Learn more about AFSA by visiting firesprinkler.org.