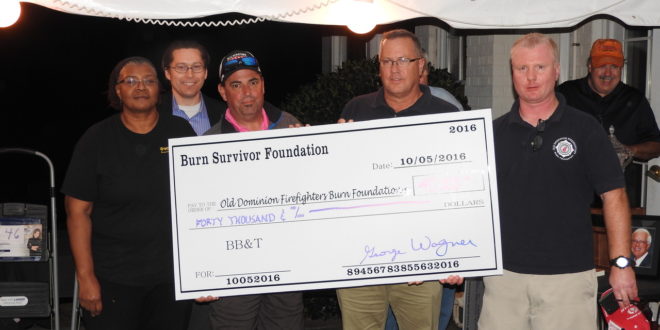 Virginia Chapter members were proud to donate $40,000 each to the Old Dominion Firefighters Burn Foundation and the Central Virginia Burn Camp.

Chapters in Communities: Making a Difference

The AFSA Virginia Chapter held its 23rd Burn Survivors Golf Tournament on Wednesday October 5, 2016 at the Royal New Kent/Brickshire golf courses in New Kent County, Virginia, just outside of Richmond, Virginia. We had an overcast and cool but otherwise beautiful fall day! This event was well attended with 196 paid golfers and 40 volunteers.

“The Virginia AFSA Chapter does an excellent job promoting our industry and life safety,” comments Don Gore, Ferguson Fire & Fabrication general manager, who played in the tournament. “The annual Burn Survivors Golf Tournament shows AFSA-Virginia’s continued commitment to burn victims and their families. Ferguson Fire & Fabrication is proud to support such an important cause. It’s been an honor to be a major event sponsor over the years, and to see two deserving charities benefit from the money raised.”

The chapter also wants to thank O’Toole’s Restaurant & Pub for donating lunch for all golfers and volunteers and for providing a great dinner. We want to thank both Colonial Ford Truck Sales and Haley GMC for the Hole-in-One sponsorship.

Chapter members are pleased to announce that we have set up a Virginia non-profit corporation. We have received a 501(c)(3) designation from the IRS and named this corporation The Burn Survivors Foundation. To see the activities of the Foundation or make a donation, please visit burnsurvivorsfoundation.org. A GoFundMe account for donations has also been set up and can be accessed on this website.

“It is an honor to work with this great group of individuals and to see what can be accomplished when people come together and work hard for a great cause!!!

“Not to look past our 2017 tournament, but in 2018 we will be celebrating the 25th anniversary of this tremendous event. We are already working and planning for a very special event that day to celebrate one of the founders of this tournament, Marty Giles. If you’ve helped in the past… THANK YOU!! If you haven’t, please look for information coming soon in Sprinkler Age or visit our websites at afsavirginia.com or burnsurvivorsfoundation.org.” Medovich says.

I have been involved in this event from day one and am honored and proud of our accomplishments to support two very worthy charities for the last 23 years. The AFSA Virginia Chapter members and friends give us tremendous support for this event and we would not be successful without them. The AFSA Virginia Chapter would like to invite everyone to participate in the 2017 AFSA Burn Survivors golf tournament on Wednesday, October 4, 2017. Please put this on your calendar now to save the date!

ABOUT THE AUTHOR: George Wagner is executive director of the AFSA Virginia Chapter. For more information on the chapter, contact Wagner via email at gwagner@argusfirecontrol.com.