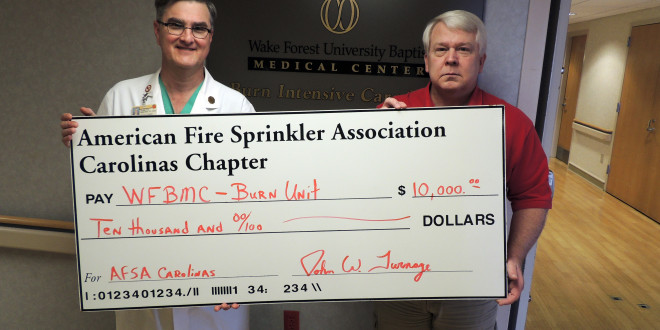 The Membership & Chapter Development Committee of the American Fire Sprinkler Association (AFSA) recently selected its Carolinas Chapter as the first recipient of the Outstanding Chapter of the Year Award. The award was established to recognize excellence in chapter administration and programs. Selection criteria is based on chapter activities that accomplish the following: raise industry standards, encourage education and training, provide public service, further the established goals of AFSA, and encourage member participation and chapter growth.

Among the activities that brought the Carolinas Chapter to the 2015 winner’s circle were:

As a national association, AFSA has from the beginning recognized that many of the most important and significant achievements of the association are accomplished at the local chapter level. While AFSA’s annual Convention & Exhibition provides an unequaled opportunity for networking with other members from across the country, local chapter activities allow members to more frequently experience that personal side of the association where they can network their services and enjoy friendships throughout the year. However, without effective chapter leadership, those local opportunities will not exist. Therefore, AFSA has established several programs to encourage strong, active chapters.

“The thing was how could we create the award, what information would be used and how could it be done to be fair to all chapters? Would it be a specific event or a year of chapter activities? We created a subcommittee of four people and they wrote the basic guidelines. The issue then became how to score it. We came up with a scoring system that, although it is not perfect, is fair to all chapters.

“The final applications were received and were all opened at the same time by the review committee, which was composed of nine people. I have to admit that after all the time spent putting this award together, it was very exciting to see the final packages submitted. I was truly impressed with the application packages and all the hard work these chapters did putting them together.

“The scoring was done in three separate groups. Each group of three people scored a specific section of each application. No individual group saw any scoring other than what they were specifically reviewing and scoring. When all scoring was completed, we added the numbers up and the Carolinas Chapter had won. I was really surprised at how exciting the scoring process went and how close the applications were,” Weisz explains.

As the 2015 winner, AFSA’s Carolinas Chapter will receive a banner to display at meetings and other events, recognition in Sprinkler Age magazine and at the 2015 AFSA Convention in Phoenix, as well as funds to provide travel to the convention for the chapter chairman and executive director.

“The Outstanding Chapter Award is a mark of distinction that reveals the qualities of leadership that characterize the great potential of members in their chapters,” notes Jeff Livaudais, AFSA director of Membership & Chapter Relations.