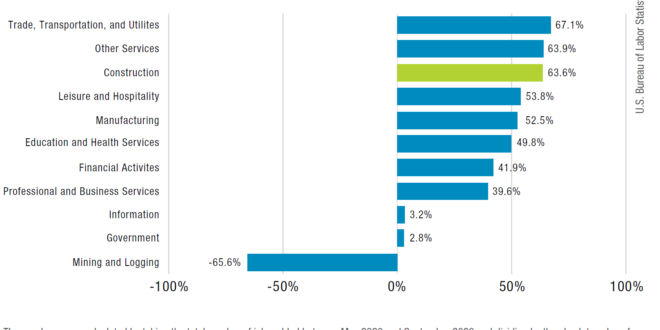 These values were calculated by taking the total number of jobs between May and September 2020 and dividing by the absolute value of jobs lost in March and April 2020. For example, construction lost a total of 1.1 million jobs, but has since added 689,000, roughly 63.6 percent.

Associated Builders and Contractors’ Chief Economist Anirban Basu forecasts a recession threat for the construction sector next year, but has illuminated some potential economic bright spots, such as e-commerce and Class B office space, according to a 2021 economic outlook published in Construction Executive magazine.

Although ABC’s Construction Backlog Indicator—a leading indicator that reflects projects under contract yet to be executed—rebounded to 7.7 months in October, an increase of 0.2 months from September 2020’s reading, and although construction had added 689,000 jobs by September (after a loss of 1.1 million in March and April), Basu indicates that another surge of case numbers paired with a lack of new stimuli from Congress, as well as supply difficulties—such as increasing softwood lumber and steel prices—will likely result in a “W” shaped recovery.

“Another recession may be on the horizon,” Basu said. “Critically, one could occur even if a further stimulus is passed. Stimulus supports the demand side of the economy, primarily. Another shutdown would compromise the economy’s ability to produce (supply side), presumably leading to another round of mass layoffs, job loss, crumbling consumer confidence, corporate bankruptcies and other negative outcomes. If the first recession is any indication, the next one will be sharp and short. Regardless, that would delay complete recovery, which is the ultimate aspiration.”

These factors have pushed nonresidential construction to the brink. Commercial real estate, Basu determines, is particularly on the outs because the majority of the American workforce has abandoned Class A office spaces for their homes. In fact, the negation of commutes, childcare concerns, and office distractions have meant that 37 percent of workers now complete their jobs entirely from home.

“Survey data indicates that lending to commercial real estate ventures has tightened, while state and local government finances have been compromised, especially in states that depend upon substantial tourism activity,” Basu said. “This only adds to the simmering uncertainty that lingers, resulting in less risk-taking among developers and others who procure nonresidential construction services. Nonresidential construction employment is down almost 6 percent on a year-ago basis as winter approaches.”

Basu also notes that backlog data has been receding, with some contractors indicating that they will exhaust current backlog by year’s end. And, according to ABC’s November Construction Confidence Index, the readings for sales, profit margins and staffing levels once again decreased, although staffing levels remained above the threshold of 50, indicating expectations of expansion over the next six months.

“Even with all these negative signs in the construction market, there are some bright spots,” Basu said. “One segment that has benefited from the shutdowns and social distancing measures is e-commerce.”

ABOUT THE AUTHOR: Anirban Basu is chief economist for ABC and chairman and CEO of the Sage Policy Group. For more information, visit abc.org/economics.