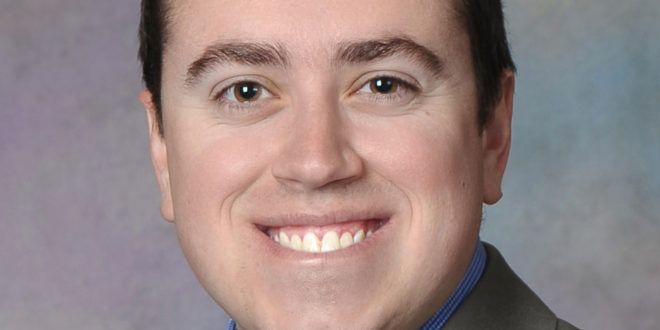 AFSA’s NextGen Initiative is pleased to announce that Christopher Crivello, PE is an Honorable Mention winner for the Young Professional of the Year award.

Crivello, principal and partner of RAN Fire Protection Engineering, PC, Albany, New York, has dedicated his life to the fire protection industry. He has earned his Bachelor’s of Science degree in mechanical engineering from Rensselaer Polytechnic Institute, along with a Master’s of Science degree in fire protection engineering from Worcester Polytechnic Institute. He also became a Licensed Fire Protection Professional Engineer in the State of New York in 2015. He has been working with RAN since 2011 and during that time, he has worked on numerous fire protection designs in various fields which include commercial, healthcare, industrial, historical, and residential buildings. He is also actively involved in the Patriot and Upstate New York chapters of AFSA.

George Olson, with Potter Signal, nominated Crivello for the award. “Over the past three years, I have witnessed Chris speak at numerous association events throughout the Northeast. He also travels to a different city about once a month to teach an all-day seminar on fire protection engineering. At the crux of all of his presentations is one message: ‘The decisions we make impact lives,’ which sums up his dedication to advancing the field of fire protection.”

In addition to his professional pursuits, Crivello was involved in a life-changing experience on October 28, 2016. That night, while enjoying dinner with family and friends at a local restaurant, a gas leak lead to an explosion in the kitchen and the building became engulfed with fire. In a building which did not contain fire sprinklers or a fire alarm system, Crivello not only managed to escape unharmed, but his actions were responsible for saving the lives of 40 people that night. Since then, Chris has become dedicated to spreading his knowledge about fire protection engineering, working to educate engineers, designers, contractors and anyone who will listen about fire protection awareness.

“The night of the Blessings Tavern fire, no one reacted until I started shouting ‘Get out of the building!’ People just watched as the fire was growing,” states Crivello. “This just goes to show how important fire sprinklers and fire alarms are to saving lives.”

What keys to success does Crivello offer to those in the industry? “My secret to success is simple: work hard, continue to learn every day, and have fun while you’re doing it,” Crivello states. “You need to enjoy what you are doing to stay motivated and be successful. In fire protection, we get to experience something different every day and know that we are saving people’s lives in the process; that is what I enjoy and what keeps me motivated.”

Crivello also notes that education is important – both within and outside of the industry. “Education is the key to your professional responsibility. This goes across the board. Whether you are a sprinkler fitter, NICET technician, company owner, AHJ or professional engineer, it is your responsibility to act within the limits of your education and experience when designing and installing code compliant systems,” Crivello notes. “Fire protection is a business that few people understand, and people are afraid of what they don’t know. Because of that we are seeing legislatures pass licensure laws across the country, whether we as an industry agree with them or not. I think the key for our industry in the future is not necessarily fighting these legislatures, but rather educating them to make sure the licensure laws are based on education programs which can actually produce qualified and competent workers, such as the AFSA apprentice training and foremanship training programs.”

When Crivello does find free time outside of the industry, he spends it in the water as an avid fisherman, watching hockey, and volunteering as a coach for the Arctic Foxes women’s hockey team from Clifton Park, New York. AFSA commends Crivello on all he has done for the industry and congratulates him on this recognition!

Previous YPY Honorable Mention: Stuart Weeks
Next We Can Work It Out