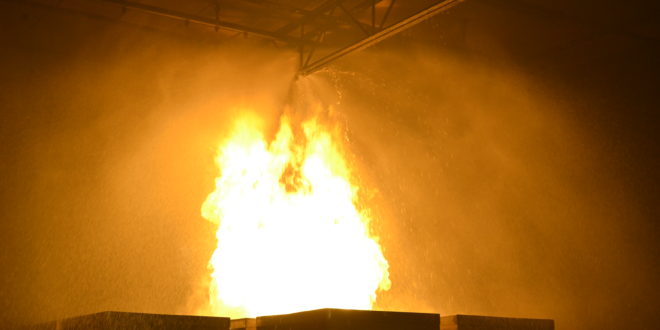 Early suppression fast response sprinklers (ESFR) are high-volume, high-pressure sprinklers that are often used to protect combustible storage as an alternative to installing in-rack sprinklers. Compared to the standard spray sprinkler, ESFR sprinklers have a significantly different spray pattern and they apply much larger amounts of water to the fire, which makes them more sensitive to obstructions such as beams, trays, lights, etc. As such, special considerations need to be given to the impact that obstructions near the sprinkler heads have on the successful operation of ESFR sprinklers.

Recently, tests have been conducted with obstructions that are not allowable by NFPA 13 where the ESFR sprinklers still proved successful in controlling the fire. The information provided from these tests as well as information from further testing could be valuable for any revisions of the NFPA 13 requirements for ESFR sprinklers and obstructions.

For these reasons, the Fire Protection Research Foundation initiated a two-phase project, titled “Obstructions and ESFR Sprinklers.” The first phase of the project consisted of a literature review to gather available test data regarding ESFR sprinklers and obstructions, analyzing the knowledge gaps within the data, and developing a research plan for future ESFR sprinkler testing. The second phase of the project consisted of implementing the test plan developed in the first phase. Phase 2 testing focused on open web bar joist obstructions and identified remaining knowledge gaps for future phases.

Beginning in March 2014, researchers from Aon Fire Protection Engineering (now Jensen Hughes) began conducting a literature review of related ESFR testing methods and data. Areas of focus were identified through the literature review that were lacking representative data. Further understanding of these areas was deemed to be useful to the overall objective of assisting the NFPA 13 technical committee. A test plan was then developed that aimed to obtain information which was not gathered through the literature review.

Phase 2 of the project then began, which included conducting experimental tests based on the plan developed in Phase 1. Two separate types of tests were conducted: Actual Delivered Density (ADD) testing and full-scale fire testing. ADD testing (both with and without obstructions) was utilized to identify the obstruction parameters for the full-scale testing. The full-scale fire testing consisted of five large-scale fire tests, each of which was conducted with double-row racks using a nominal storage height of 30 ft and a ceiling height of 40 ft and standard cartoned unexpanded Group A plastic. The five large-scale tests were conducted to gather data to establish the acceptable threshold that the ESFR sprinkler could be obstructed until the obstruction prevented the ESFR sprinkler from meeting its performance objectives. The pass/fail criteria for the full-scale tests were: a maximum of eight sprinklers activating, fire generally contained in ignition array, and ceiling temperatures remained low enough such that exposed structural steel would not be endangered. All full-scale tests were conducted with K-17 ESFR sprinklers.

After the completion of Phase 2 testing, several conclusions were made and highlighted in the report:

Based on this series of tests, the impact of obstructions up to 5-6 in. in width, 6 in. horizontally from the sprinkler, and at a vertical distance of 22 in. from the sprinkler are better understood. The effect of bridging members 1½ by 1½ in. in size is also known.

Another outcome of the Phase 2 work were recommendations for future work, which includes additional testing of bridging members on different bar joist depths to increase the understanding of the vertical distance effects of the obstructions. There is also a need to explore the impact of miscellaneous obstructions such as light fixtures, cable trays, etc. Therefore, the Foundation is continuing work with a Phase 3 project that will focus on these topics.

The ESFR and obstruction project was supported financially by the Foundation’s Property Insurance Research Group (PIRG), Globe Fire Sprinkler Corporation, IKEA, P&G, Target, Tyco, and Viking. The reports from both Phase 1 and 2 are available on the Foundation’s website, nfpa.org/foundation.

ABOUT THE AUTHOR: Amanda Kimball, P.E. is senior project manager, The Fire Protection Research Foundation in Quincy, Massachusetts. She can be reached via email at akimball@nfpa.org.

Previous How to “Win a Bid”
Next Customer Service