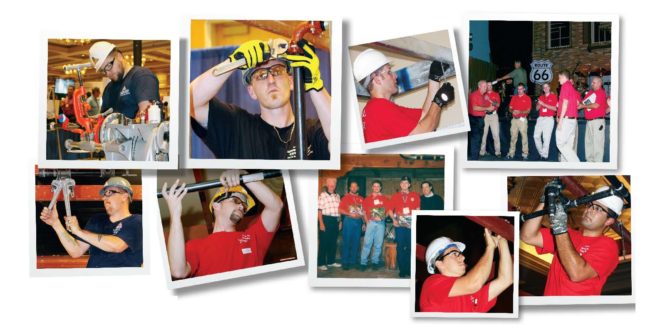 Started in 1994 by the late Robert L. (Bob) McCullough, then chairman of the Apprenticeship & Education Committee, AFSA’s Annual National Apprentice Competition was created to promote apprentice training and give recognition to the apprentices who are actively enrolled in the AFSA Apprenticeship Program. Twenty-five years later, the competition continues to attract more fire sprinkler apprentices from AFSA local chapters and member training programs from all corners of United States bringing them together for the fire sprinkler industry’s foremost showcase of training excellence.

When AFSA was formed 36 years ago, its founders had a vision: to be the industry leader in fire sprinkler education and training. “This competition really showcases what this industry is all about, which is life safety and education,” says Linda Biernacki, president of Fire Tech Systems, Inc., Shreveport, Louisiana, and secretary of AFSA’s Board of Directors.

As the competition grows, more apprentices than ever before enter to compete in the two-day competition culminating in a live install before record crowds of attendees in the AFSA exhibition. At the core of the competition, and more so, the program that drives the competition’s success, the AFSA/NCCER Contren® Learning Series Sprinkler Fitting curriculum, is AFSA’s most important initiative, education.

Modernizing in the Digital Era This showcase of not just apprentice training, but education has remained largely unchanged in the 25 years since its inception. However, this year AFSA is pleased to announce a monumental change that will impact the accessibility of testing and ability to participate for all apprentices interested in competing!

For first-time ever, AFSA is proud to introduce online testing for Phase I of the competition. The initial qualifying testing will now take place online instead of in a proctored location at a designated time as in years past. The addition of this new testing systems will add a whole host of benefits for those competing this year, as well as in years to come. First and foremost, the system increases the convenience of testing. Apprentices will now schedule a time during the testing window and be able to test online when and where it is convenient for them. Additionally, the competition is now open to members in all 50 states to compete for the first time ever! This introduction will streamline the testing process for all involved and allow more apprentices than ever before the opportunity to raise the stakes in the competition.

Celebrating Silver As it continues to modernize and expand, AFSA’s 25th Annual National Apprentice Competition in Washington, DC is preparing to be one of the biggest events of the year! One of the most excited to see how this year’s competition will play out is Chance McCollister, the winner of last year’s competition. Sprinkler Age caught up with McCollister to see how the apprentice competition has impacted him and his company, and to hear what advice he has for incoming apprentices following his win at AFSA36 last year.

McCollister, who represented Fire Tech Systems in Shreveport, Louisiana, says simply, “[The National Apprentice Competition] is a chance to show what you’re worth and what you can do. The feeling of hearing my name called as the winner is still unforgettable to this day, and this win is what I wanted for both my personal life and my career path.”

McCollister continues, “[The National Apprentice Competition] gave me an opportunity to make my life so much brighter and it will do the same for future apprentices.”

When asked how McCollister’s win has changed the dynamic for her company, Biernacki continues, “[Chance’s] win has made the whole office energized. The new apprentices are more eager than ever to participate.”

However, more than just the excitement in her company, Biernacki has seen a shift in excitement all across the state of Louisiana as far as training is concerned. She says, “It’s added a renewed excitement for apprentice training, not just for us, but for much of the Louisiana Chapter of AFSA.” Biernacki believes that this competition serves a two-fold purpose, firstly, “highlighting the merit shop philosophy through a showcase of excellence in training that is integral in this industry.” Additionally, Biernacki believes the competition gives “a reason to be engaged in [the fire protection] industry when so many other industries are vying for the same workforce.”

The National Apprentice Competition truly offers a little something for everyone from the excitement that can rock a whole company, to the personal victories each apprentice gets to experience during the competition. New apprentices feel excitement and a healthy sense of competition with their peers at the prospect of winning top prize and accolades for their companies, and companies benefit by having an extremely well-trained, efficient, and more motivated workforce. Even those who are not participating in the competition have the motivation of seeing hardworking apprentices continue to strive to improve the industry and its reputation for all! The competition has been and remains an important reminder of training and industry excellence that shines throughout the year and is a hallmark of AFSA conventions.

AFSA invites all interested apprentices enrolled in its apprenticeship training program to participate – this year the winner could be you! Besides an expense-paid trip to Washington, DC, to compete at AFSA37, each of the top seven national finalists received a commemorative plaque, tools, cash prizes, and a complimentary convention registration for their employer to come cheer them on.

While the competition only takes place once a year, the legacy it leaves behind lasts far after the competition has ended and the winners have been announced. The deadline to register to compete in the 25th Annual National Apprentice Competition is April 13, 2018. To learn more about the apprentice competition or to enter, visit firesprinkler.org/apprentice. 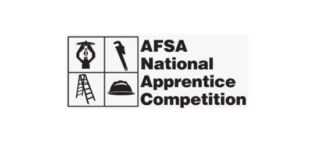