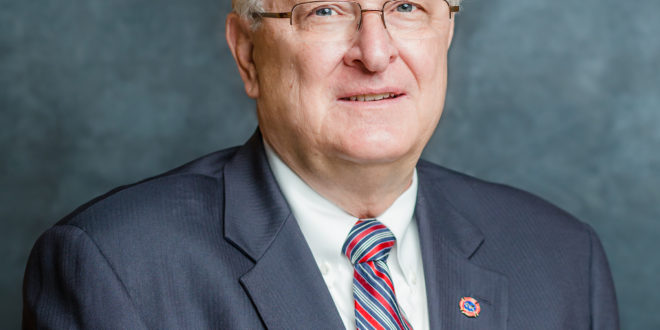 After spending over 40 years in fire protection and life safety, retired Virginia Fire Marshal Ed Altizer can safely say that he has shaped the course of Virginia’s fire safety landscape. From his beginnings as a field engineer to his two decades as state fire marshal, there is no doubt that Altizer is fully committed to the advancement and advocacy of fire sprinklers. This year, the American Fire Sprinkler Association (AFSA) is proud to honor Ed Altizer as its Fire Sprinkler Advocate of the Year.

Charles E. (Ed) Altizer was born in Tazewell, Virginia, and devoted his life to keeping Virginians safe. He graduated from Virginia Polytechnic Institute and State University (Virginia Tech) in 1970 with a degree in civil engineering, and a particular specialization in hydraulics. Right out of college he joined the United States Air Force, and served just under three years. He is the first to admit that he fell into fire protection entirely by accident. He was introduced to the industry when he was working as an Air Force engineer.

“As a second lieutenant in the Air Force I was the low man on the totem pole, and working with fire codes was not the top priority of most engineers,” says Altizer. “My supervisor laid the NFPA 101 standard [Life Safety Code.] on my desk and told me to look at the plans I was designing to make sure they met the Life Safety Code.”

Although he didn’t know what the standard was, he knew it was his job to study the code, learn it, and make the buildings he was working on comply with it. It sparked an interest in safety that would shape the future of his career.

In 1974, a friend of his who was working with the state fire marshal’s office told him they had an opening for an engineer in Marion, Virginia. Altizer knew that working in state government was a popular thing to do among his peers, and he found that his experience with the Life Safety Code gave him an advantage when it came to getting the job. Then, he found that he genuinely enjoyed the work.

“I saw the good that we could do over the years,” says Altizer. “You see people dying in fires and you want to do something.” Altizer was always eager to be involved in changing things for the good.

Altizer began his career with the state fire marshal’s office in November of 1974 as a field inspector, engineer and regional manager in the Southwest Virginia Regional Office. His primary work at the time was to review building plans and make sure they conformed to state codes. He reviewed many hospital and nursing home plans, and over the years his work only reinforced the knowledge that fire sprinklers save lives.

“I remember as a young engineer I was called to help investigate a fire in an old hotel where several people died,” says Altizer. “It was only a two-story building, and that speaks to the value of fire sprinklers… sprinklers certainly would have saved their lives.”

In 1989, tragedy struck in Norfolk, Virginia. Nine elderly people died from smoke inhalation in a fire at the Hillhaven Rehabilitation and Convalescent Center, and all fire officials agreed that the fire could have been easily contained if the four-story building had been equipped with a fire sprinkler system. After that, Virginia became the first state to require retrofitting of fire sprinklers in nursing homes, and Altizer was a key member of the committee that made that happen. And then, in 1994, a fire at the Southside Regional Medical Center in Petersburg, Virginia killed four patients, and Altizer and the State Fire Marshal’s office worked to retrofit all Virginia hospitals with sprinklers. Altizer even worked personally with Senator Stanley Walker (D-VA) to retrofit all high-rise dormitories in Virginia with fire sprinklers.

In 1993, Altizer was selected associate director and assistant state fire marshal, which brought him to Richmond, where he oversaw field operations. Just two years later, he was appointed state fire marshal in December of 1995. As state fire marshal, Altizer made a huge difference in the lives of Virginians by dedicating himself every day to the advancement of fire sprinklers. He served for 20 years on the Virginia Fire Services Board and on several other national and state committees responsible for developing the building and fire codes which are used as the basis for Virginia’s building and fire codes: the National Fire Protection Association’s (NFPA) Technical Committee on Air Conditioning and Ventilation, the International Code Council Health Care Ad Hoc Committee and the International Code Council’s Fire Code Development Committee. Altizer also served 12 years on the Board of Directors of the International Fire Marshals Association (IFMA) and served two years as president. IFMA is a section of NFPA, and his time on the board gave him the opportunity to spread the word about the tremendous life-saving benefits of sprinklers at the national level. He served as chairman of the National Association of State Fire Marshals’ Model Codes Committee, where he worked to pass code that would require fire sprinklers in all single- and multiple-family dwellings.

“I was very lucky to be named chair of that committee and to work with a lot of great people on it who worked hard to make that happen,” says Altizer. “We got a lot of resistance from home builders. I say we because it takes cooperation to get this done.”

And cooperation he had, especially from the AFSA Virginia Chapter, which he credits as a great advocate and supporter of the state fire marshal’s office in its efforts to make fire sprinklers a fixture in all Virginia buildings. “I think something people don’t understand is that they’re not doing this to make money,” says Altizer, referring to fire sprinkler contractors and the members of AFSA Virginia Chapter. “They understand the importance of fire sprinklers. Because of their support, I had success in Virginia. If I asked them for information, I would get it.”

The admiration Altizer felt for the chapter was more than reciprocated. George Wagner, executive director of the AFSA Virginia Chapter, is a great fan of Altizer’s work.

“I can think of no one more deserving of this award than Ed Altizer,” says Wagner. “I have worked with Ed on many issues since he became the Virginia state fire marshal in 1995. Ed always listened; he was fair and thoughtful and he was an enormous supporter of fire sprinklers. Ed Altizer has fought hard for life and property safety and the citizens of the state of Virginia have benefited from his efforts and wisdom.”

In addition to being grateful for the help he received from the AFSA Virginia Chapter, Altizer also feels indebted to the Virginia Fire Service for all of its support throughout his career.

Even though he is now retired, Altizer is not finished with his fire sprinkler advocacy, not by a long shot.

“I think that when the state requires something of a building owner, requires that they install sprinklers systems and  maintain them,” says Altizer, “it’s imperative that the government also provide additional protection by requiring those people providing installation and maintenance meet a certain level of excellence.”

Altizer hopes to pass code that will require sprinklers be properly installed and maintained. He recalls that one of the leading violations he would see as the state fire marshal was improper maintenance. Altizer acknowledges that most of the contractors in the market do exemplary work, but he still sees examples of systems not being properly maintained.

“There’s nothing we can do because there are no regulations in Virginia,” Altizer laments. “That’s something I will continue to work on, and I’m willing to work with George [Wagner].”

Today, Altizer lives in Hanover County, 10 miles from downtown Richmond, Virginia. He lives there with his wife, Sharon, and they are often busy entertaining their three grandchildren. Altizer has always enjoyed sports; when his four sons were young, he coached their Little League baseball, basketball and soccer teams, and he used to do quite a bit of fishing and hunting.

“My wife tells everybody that all I do is fish, never catch,” Altizer chuckles. “My hunting is limited to the grocery store now.” He also enjoys gardening, and traveling with his wife when they can.

Despite all his accomplishments, Altizer was still surprised when AFSA President Steve Muncy called him to let him know he had been named the Fire Sprinkler Advocate of the Year.

“To win an award for something you believe in, something you worked for, with no expectations other than to make buildings safer?” Altizer laughs. “I was shocked. It was a passion of mine, but I didn’t do it for any recognition or awards. I did it for the safety of the citizens.”

AFSA created the Fire Sprinkler Advocate of the Year award to honor individuals not directly involved in the fire sprinkler industry whose efforts have significantly advanced the fire protection industry and automatic fire sprinklers. Nominees are recommended by AFSA’s Legislative Committee and approved by the Board of Directors.

“Some of the best proponents of fire sprinklers are the fire service, and there is no one who is a bigger advocate of sprinklers than Ed Altizer,” says Muncy. “Ed has seen the result when sprinklers activate and put out the fire, and he has seen the tragedy that results when sprinklers were not present. As Virginia state fire marshal and through his involvement with national organizations, Ed has been a consistent spokesman for saving lives and property through fire sprinklers.”

Altizer’s long, distinguished career in fire safety has included many instances of passionate advocacy for fire sprinklers, which is why AFSA is proud to honor him this year. When a man spends his life working tirelessly to make the lives of others safer, that is worth recognizing.