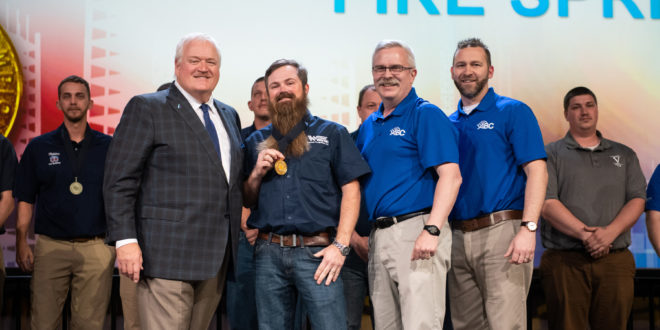 Eckert has been with Wayne Automatic Fire Sprinklers for four years as a service helper. He was previously a manager at a local Home Depot and decided to make a life change. Robert Gant, his service manager, notes that Eckert “excelled tremendously in the sprinkler industry,” promoting to a foreman position within eight months of being in the trade. Recently, Eckert was promoted again to service designer.

“I could not be more proud of Rick and his accomplishments,” comments Gant. “He truly represented Wayne Automatic Fire Sprinklers, ABC, and the entire fire sprinkler industry well with his knowledge and performance at the NCC competition. I am grateful that I have had the chance to work with Rick and see him grow in the industry. Congratulation to Rick and all the other competitors!”

Eckert notes that his experience at ABC was “amazing” and says: “Both Wayne Automatic and the ABC Florida Gulf Coast Chapter gave me an opportunity to go to Long Beach and show the states what I have learned in the last four years. I strove to be the best, by doing the best.”

He continues: “When I first started working at Wayne Automatic in 2015, I began as a helper and never knew what a fire sprinkler was. I quickly enrolled in ABC through Wayne Automatic and pursued my years of schooling. During my on-the-job training, I became a certified backflow tester and also received my NICET for Inspection and Testing of Water-Based Systems. All the information that was taught in the program was used in the field,” Eckert says.

Patch has been an employee with Piper Fire Protection for five years, since he was only 18 years old. He started in the sprinkler construction department as an apprentice, even enrolling in the journeyman program. Patch competed in AFSA’s 2018 National Apprentice Competition and won the bronze medal. He used that competition as a training opportunity before competing in the ABC NCC.

“The opportunities that have been presented to me have been incredible,” says Patch. “I intend to work my career with Piper and continue to climb the ladder to manager and higher, if possible before I retire.”

“Tyler did a fantastic job representing us at the ABC Craft Championship this year,” says Piper Fire Protection’s President & CEO Chris Johnson. “He finished his project ahead of the other competitors and did remarkable on the practical as well. I am so proud to have so many first-class craftsmen working at our company.”

The NCC featured a field of 168 craft professionals competing for top honors in 14 competitions representing 12 crafts, from electrical and plumbing to carpentry and welding, as well as a team competition with journey-level competitors from four different crafts working to complete a joint project. The competition includes a two-hour written exam and a daylong, hands-on practical performance test. 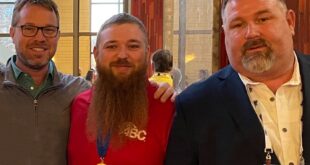