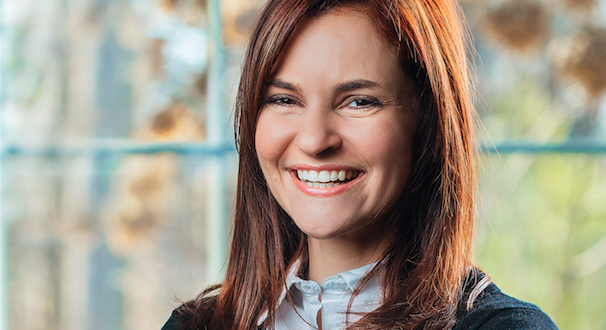 It’s safe to say that Meaghen Wills has fire sprinkler contracting in her blood. The third-generation contractor has literally grown up surrounded by the fire protection industry and is now making her own distinct mark on the industry she loves.

The petite powerhouse has served the American Fire Sprinkler Association (AFSA) in many capacities including on the board of the Mid-Atlantic Chapter and on a handful of national committees, but perhaps her most notable contribution to-date is creating, cultivating, and leading AFSA’s young professional group the Next Generation Initiative.

For these reasons, AFSA is pleased to announce that Meaghen Wills of Anchor Fire Protection in Perkiomenville, Pennsylvania has been elected by her peers as recipient of AFSA’s inaugural Young Professional of the Year (YPY) award. The award highlights the efforts of a young and talented fire protection professional, who is under 40 and demonstrates exemplary technical, professional and inclusive leadership skills not only in their own businesses, but also at a national level. The inaugural award will be presented at the AFSA’s 35th Annual Convention & Exhibition in Nashville, Tennessee.

Contracting is a family affair

Wills is a pioneer, creating the gold standard for up-and-comers in the industry. She was exposed to the fire sprinkler industry at an early age through the family business.

“A lot of the people I work with now I grew up around,” muses Wills. “My boss Don; our field superintendent Jim; and our lead estimator Marcia, they have been around for 20-25 years, so they’ve been around almost as long as I’ve been alive. They’ve all had a different lasting effect on how I developed over the years.”

After a brief stint in college at University of Hartford in West Hartford, Connecticut when she aspired to become an on-air talent at ESPN, the Philadelphia Eagles fan found herself being called back to the family business.

“After college I got to thinking about what my dad has been doing my whole life and how hard he and my grandfather worked to build everything we have now. My brother and sister wanted nothing to do with [the family business] and it was just an a-ha moment for me. I thought why should my family throw away everything that we’ve worked so hard for? The more I thought about it, the more I thought let’s give it a try,” says Wills.

Because her father wanted to her learn all aspects of the trade, Wills started out in the fab shop at Anchor Fire Protection in July 2005 and then moved into the field. In January 2006, she attended the AFSA Beginning Fire Sprinkler System Planning School in Dallas and immediately upon return she began designing sprinkler systems.  “[Working all aspects of business] was really so I could understand all that we do from installing to designing systems, so I could do what I’m going now, which is project management and sales,” explains Wills. “Lately, I’ve been learning more of the operations side of things, so we can start talking about succession.”

So, what started out as an experiment soon grew into a passion and almost 12 years later, the NICET level II designer is still loving working for her family’s business. In many ways, she credits her success and drive to her father Ted Wills Jr., who began his fire sprinkler industry career in 1978, when he started a fire protection division as part of his father’s mechanical company. The division flourished, and in 1981 Ted Wills Jr. and his father incorporated that division into Anchor Fire Protection, a full-service fire protection contractor in the Philadelphia, Pennsylvania-area.

“One of the wonderful things about being involved in the fire sprinkler industry is watching a new generation of leaders becoming involved in the industry”, says AFSA President Steve Muncy. “I first ‘met’ Meaghen Wills when she was a small child and attended some AFSA meetings with her parents when her father, Ted Wills, first served on the AFSA Board of Directors 25 years ago.”

Ultimately, Wills says she wants to become her father. “If you would have asked me 12 years ago, there’s no way I would have said that I wanted to be just like my father but I admire what he has done over these 30-plus years. The way he completely built the sprinkler division from the ground up to what it is now. We have a service division, a contract division, a fire alarm and security division – it’s really grown exponentially. I want to try to continue with everything he has built, but build on it at the same time.”

At her father’s suggestion, Wills quickly became involved with her local AFSA chapter – the AFSA Mid-Atlantic Chapter, ascending quickly to its chair position. She brought with her new fresh ideas, like virtual meetings to better serve her wide-reaching membership, and over a couple of years, she worked diligently with other volunteers, like fellow Next Gen member Ray Fremont Jr. of General Air Products Inc. in Exton, Pennsylvania, to increase the membership and reach of the AFSA chapter serving Pennsylvania and Delaware.

Fremont says, “I am constantly amazed by [Meaghen’s] ability to command the attention of those around her. I think it is because she speaks her mind and isn’t afraid of hard work. No matter the environment – professional conversation, local chapter meetings or national committee meetings, she consistently articulates well-formed ideas, and is able to then recruit others to join with her to form a plan and meet goals. These uncommon traits make her a valuable asset to everything she involves herself in and a credit to young fire sprinkler professionals.”

Fostering the next generation of leaders

She made a name for herself in her local AFSA chapter, before she was appointed to her first national AFSA committee. AFSA Board member Linda Biernacki of Fire Tech Systems in Shreveport, Louisiana, recalls, “I remember when Chairman Joe Heinrich appointed me as chairman of the Convention Committee, I knew I wanted Meaghen on my committee. Meaghen lights up every meeting she walks into, her smile and energy is contagious and you want her on your team.

Shortly after she was appointed to the Convention Committee, she was asked to serve on two additional national committees: the Apprenticeship & Education
and Public Education & Awareness (PE&A). And it was there at a PE&A Committee meeting in January of 2014 that she started to formulate the basis for what would later become the Next Generation Initiative. “At one point, [Meaghen] looked around and saw that she was the youngest person in the room, and she became committed to getting more young people involved in AFSA,” recalls Muncy.

The timing was right to act. For quite some time, then Chairman of the Board Joe Heinrich of Bamford Fire Sprinkler Co. in Salina, Kansas, had been mentally surveying the landscape, forming the idea that the industry needed to begin searching for the next cohort of management. “During a committee meeting, Meaghen made a comment that truly resonated with me and essentially solidified what I had been considering,” recounts Heinrich.  “It was time to begin searching for and developing the next generation of leadership. And not just for AFSA, but the fire sprinkler industry in general. A relatively short time later, after much deliberation and discussion regarding avenues to pursue for this initiative, I approached Meaghen about leading a group of her peers in gathering ideas and developing a structure for this initiative.  Meaghen did not hesitate to accept the challenge and the rest is, as we always say, history.”

After meeting with Heinrich, it was decided that Meaghen Wills – together with her good friend and fellow fire sprinkler contractor Allison Rees – would chair a special initiative tasked with engaging and encouraging more young people involved in the industry.

“From April 2014 through the rest of that year, it was definitely a struggle, because not everyone was open to the idea, but eventually I think they just got sick of my persistence,” recounts Wills. “One of the challenges is getting into the head of the business owners and managers that what we’re trying to do is a good thing and we’re not trying to push them out. We’re trying to work with them to ensure the future success of their company. We’re getting there.”

In September 2014, the Next Gen group hosted its first event: a networking happy hour at the 2014 convention in Orlando. Biernacki remembers, “The event was so successful people were literally standing outside the room looking through the glass wall. That’s what Meaghan does; she brings collaboration, excitement and energy to each project which breeds success!”

Since its first event the AFSA Next Gen group has grown by leaps and bounds. “If it wasn’t for all the efforts made in 2015, where we are now would not have happened, and because of those efforts, it happened a little quicker than we thought. The response we got at the 2015 convention and the response we got after the convention with people wanting to get into the [Next Gen] Facebook and LinkedIn groups, that was a much bigger response I thought we would get,” says Wills.

While Next Gen has taken off nationally, Wills says her biggest goal moving forward is getting AFSA chapters to participate locally in Next Gen. “We really can have a positive effect in our industry with what we’re trying to do. Our biggest challenges are also our biggest goals.”

Encouraging and rewarding the next generation

“Through her incredible tenacity and ability to pull people together, Meaghen has given a voice to an entire generation and bridged the ever-widening age gap of the fire sprinkler world,” says Next Gen Vice Chair Tiffany Moore of Moore Fire Protection in Issaquah, Washington. “Convincing an entire industry that there is a need for change is not an easy feat, but Meaghen has done just that.”

For this year’s recipient, the Young Professional of the Year award is all encompassing of her efforts and time devoted to the Next Generation Initiative.  Wills says, “It’s exciting to be a part of a groundbreaking movement in our industry that will serve the future generations.”

Ted Wills, Jr., president of Anchor Fire Protection in Perkiomenville, Pennsylvania, is very proud of the leadership role his daughter has taken in the industry. He says, “Meaghen has a tremendous passion for the industry and AFSA. It has been extremely gratifying as a parent to watch her grow into her position with Anchor Fire Protection and her commitment to AFSA’s Next Generation group. She has always had that CAN-DO attitude and I believe that becomes contagious with the people she comes in contact with on the Next Gen issues. Her enthusiasm amazes me. It is a pleasure working beside her every day.”

The inaugural award will be presented during the Next Gen reception Thursday, September 15 at the AFSA’s 35th Annual Convention & Exhibition in Nashville, Tennessee. For more information, visit firesprinkler.org/nextgen.