Greetings. I can’t believe it’s been a year since I became Chairman of the Board of Directors with AFSA. I have to admit, the last year has been eventful. In this last year, your AFSA Board of Directors has focused heavily on the delivery of sustainable value to our members. As such, this focus has been on a thoughtful, deliberate, and measured approach towards our association’s long-term growth. With the US economy booming, the fire sprinkler environment has continued to become ever more competitive. Recognizing this, the Board along with AFSA’s management are taking meaningful steps to help improve our member’s competitiveness, through a constant updating of in place educational programs. One avenue of education that is sometimes overlooked is simple networking. Networking can be done through a variety of ways. The national convention, AFSA chapter meetings, as well as the SprinklerFORUM are excellent networking platforms. AFSA chapter growth throughout the US and Canada is greater than ever before and, of course, AFSA offers the industry’s leading educational opportunities.

Whether apprentices, designers, inspectors, or company owners, the bottom line is education built AFSA. We must continue to lead the industry in innovation and training. We have had a successful and productive year. AFSA’s Inspection, Testing, and Maintenance (ITM) Inspector Development program has sold out every school to date and we’ve graduated two classes – the third will graduate in November. The Beginning Fire Sprinkler System Planning School is averaging seven classes per year, nearly all full to capacity. AFSA staff has updated testing methods so students can take tests online – including Phase I testing for our National Apprentice Competition, opening up the contest to more students than ever before.

Plans are in full swing and preparations are being finalized for AFSA37: Convention, Exhibition & Apprentice Competition, which offers a record-breaking 48 technical and managerial seminars as well as numerous social events. AFSA37 will be very special for me as we will be honoring two close personal friends of mine with service awards. First is my very close friend, mentor, and fellow AFSA Board member Don Albares, vice president of American Sprinkler, Inc., in Harahan, Louisiana. Don has served 24 years and is the longest serving member of our Board. He will be stepping down at the close of AFSA37. Don has given many, many years to this association and has seen it grow from an infant to the largest fire sprinkler association in the country. For me, it will be sad to see Don step down as he has been an absolute pillar in keeping our Board focused and heading in the right direction. I wish Don all the luck in the world moving forward.

The second, special award, the Henry S. Parmelee award, will be given to another very good friend and absolutely a mentor of mine, Kraig Kirschner. As is the case with Don Albares, Kraig grew up in this industry. He worked as a contractor then became a manufacturer and supplier. Kraig has been a huge supporter of AFSA for many years. Kraig is where I first learned about the AFSA “family.” He has always reminded me that this industry is full of good people and it has been very good to all of us.

The numbers for AFSA37 are approaching records, and this will no doubt be a convention to remember. I look forward to seeing you in DC and at the Chairman’s Reception on October 2. And I look forward to working with the Board, AFSA staff, and you – our members – during the coming year as AFSA strives to accomplish our goals and continues to be the most effective force for the fire sprinkler industry. Thank you.

ABOUT THE AUTHOR: Wayne Weisz is Chairman of the Board of Directors for the American Fire Sprinkler Association. He is president of Cen-Cal Fire Systems, Inc., in Lodi, California.

Previous Building Awareness
Next Grow Your Business by Winning Online 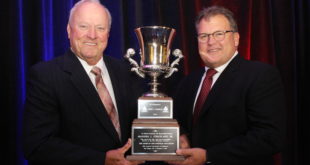