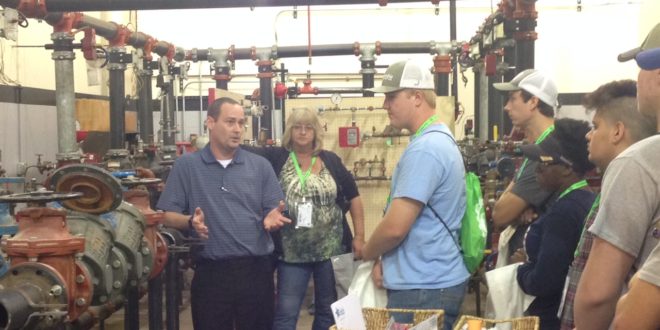 On October 26, 2016, more than 1,500 high school students from 43 schools all over the Dallas/Fort Worth metroplex converged on the west campus of North Lake College in Irving, Texas. They were there to attend the Build Your Future Career Day, an event organized to help students interested in learning a trade discover their options.

The event was co-hosted by the National Center for Construction Education and Research (NCCER) and the Construction Education Foundation of North Texas (CEF), a college dedicated to providing students and employees in the construction industry avenues to broaden their skill levels and advance construction industry careers. Every imaginable construction trade was represented on campus, and tables and booths lined the halls and spilled out into the parking lot of the 60,000-ft2 facility located on the property of the Dallas/Fort Worth International Airport. All 23 classrooms, assembly room, and 30,000 ft2 of shop space were taken up by eager representatives of construction trades, ready to show the next generation the value of their industry.

Representatives from the American Fire Sprinkler Association (AFSA) arrived bright and early, armed with boxes of AFSA jar openers, drink koozies, key chains and postcards to hand out to the visiting high school students, ready to capture their attention with the swag and hopefully keep it long enough to talk to them about the benefits of working in the fire sprinkler industry. As the first large group of students shuffled into the shop space where the fire sprinkler tables were set up, the fire sprinkler professionals in the booth gave an informal explanation of the industry and the different ways to get involved.

A fire marshal from Farmers Branch, Texas was present to give the students the Authority Having Jurisdiction (AHJ) perspective, and make sure that all of them understood how a fire sprinkler system works – unsurprisingly, many had no idea, and a few had bought into the common misconception that sprinklers go off when a fire alarm does, or that all heads trigger at once.

Once the group was aware of the basics of a fire sprinkler system, they were ready to learn about the different jobs available in the industry. Tom Noble, E.T., technical programs specialist at AFSA, explained to the group what it means to be a fire sprinkler designer. He explained the work that a designer does, and the standard salary that a designer can expect. He let them know that many jobs in the industry don’t require much more than a high school diploma, as training can be done on the job, and that there are some trade schools that offer whatever education may be necessary.

“I enjoyed seeing the youth of this country still willing to get their hands dirty building something,” says Noble. “It’s extremely important to get the younger people out there interested in the various construction trades. While technology has made life easier, to continue to build all the great things we have in America we need young men and women with the ability to depend on their own hands and not a robot or computers to do their job. They are our future.”

Contractor Art Hartman of Hartman Fire Protection, Dallas, provided a contractor perspective for the students. Hartman told the group about the day-to-day that a fire sprinkler contractor experiences, as well as the pay they can usually expect and what they need to have to get the job. He made it clear that he, like many contractors, values a good work ethic and a willingness to learn over a lot of prior experience or education. “If you’re strong, if you can be on time, if you have your own car and you’re willing to work, I’m willing to hire you and train you,” said Hartman, a statement that never failed to make students in every group smile.

Rick Matsuda, P.E., a retired plan reviewer for the City of Dallas, was present to tell the students what they could expect if they studied mechanical engineering and pursued a career in fire protection and plan review with local government. Matsuda was the 2009 recipient of AFSA’s Fire Sprinklers Save Lives award, which is presented to individuals or organizations outside the fire sprinkler industry who demonstrate understanding and appreciation of the life-saving capabilities of automatic fire sprinklers by generating positive exposure to the public. With thousands of fire sprinkler system plans reviewed and dozens of educational seminars presented throughout his career, Matsuda was the perfect person to talk to the students about the industry and provide a non-designer, non-contractor perspective.

Students seemed genuinely excited to be there learning about the fire sprinkler industry, and many had questions for the speakers about their work, their experience, and their salaries. Before each group moved on to the next booth, students crowded up to the tables to take copies of Sprinkler Age magazine, “Become a Life-Saver” pamphlets, and flyers about the AFSA High School Scholarship Contest, which awards $20,000 in scholarships to ten lucky high schoolers ($2,000 per scholarship) interested in going to a college or trade school.

As the day drew to a close and the groups of students grew fewer and farther between, the fire marshal, contractors and designers left to return to their offices and jobsites. As AFSA staff began to take down the booth and return boxes to their cars, they were confident in the knowledge that they had played a part in inspiring the next generation to join this life-saving industry.