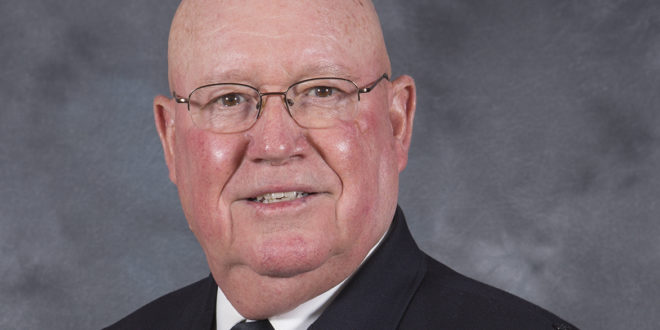 AFSA is proud to honor Richard Smith as its 2018 Fire Sprinkler Advocate of the Year recipient.

For Richard Smith, fire protection has always been an important part of everyday life. Born in Oxford, Maryland, Smith recalls having an interest in fire protection extremely early on because he lived just down the road from a fire company and recalls, “as a young man there wasn’t a lot to do around here and everything that did happen, happened at the fire company.” The fire company served as not just a place of protection, but a place where relationships were made and friendships were formed in the city. Throughout his life, Smith’s respect, adoration, and commitment to fire and life safety through volunteer firefighting and the promotion of fire sprinkler legislation in Maryland has always been front and center just like that fire company was in Oxford. While Smith continues his long and distinguished career filled with many important accomplishments, the American Fire Sprinkler Association (AFSA) is proud to honor him for all of his contributions so far, as well as those yet to come, as its 2018 Fire Sprinkler Advocate of the Year award recipient.

Humble Beginnings Smith’s volunteer firefighting career began in 1965 and this career would ultimately lead to his introduction to fire sprinkler efforts. He joined the Oxford, Maryland fire company, following in his brother’s footsteps and joining many of his friends in becoming a volunteer firefighter. Much of Maryland utilizes volunteer firefighting instead of career firefighters, even to this day. Just one short year after joining the fire service, in 1966, Smith left for a year to serve as an infantryman for the U.S. Army and returned from service in 1967. Upon his return, Smith quickly found himself elected second lieutenant of the fire company. He strongly credits this election to the president of the fire company at the time, Price Sinclair. However, it didn’t stop there. From that election, Smith recognized his need for further education on both firefighting and other methods of fire protection and began to meet with an instructor from the University of Maryland who taught him more about both subjects. While developing and honing his skills, Smith proceeded to continue to work his way up through leadership until he became the fire chief in 1975.

As firefighting was volunteer only, not career, Smith continued to hold a “second” job at a printing company to support his family as well as being a firefighter. He worked at the printing company for 24 years before leaving and finding new work in a furniture business with one of his close friends. In addition to his other responsibilities, his new furniture job required him to travel. But Smith didn’t let that deter him from continuing to travel on behalf of his passion, fire protection. He continued to travel on behalf of the Maryland State Firemen’s Association (MSFA) guaranteeing he was kept busy and engaged year-round.

There is a lot to be said for the fact that Smith didn’t let his passion for fire protection stop at just the volunteer firefighting level, though. Despite being where it began, it was only the tip of the iceberg. During his tenure serving as fire chief, Smith recalls that “believe it or not, even back in those days they talked about commercial fire sprinklers.” He continues, “even years ago sprinklers were there, you just didn’t hear about them and we certainly didn’t have them in Oxford or in most residences.”

However, Smith quickly recognized the importance of the impact fire sprinklers could have on his town, because of his background serving with a smaller volunteer fire company that was often stretched thin. He simply explains the importance of fire sprinklers saying, “We all know putting the wet stuff on the red stuff puts out the fire, so having a sprinkler system in your home that means the water will get there long before [firefighters] do.”

Once legislation began being discussed in Maryland about residential fire sprinkler requirements, Smith says the logical next step was to jump on board in support.

The Fire Sprinkler Fight Once the fire sprinkler legislation was introduced in the Maryland Legislature, his work began in earnest. Smith traveled around to surrounding counties on the Eastern Shore of Maryland to gain support for fire sprinkler legislation which was ultimately passed in 2012. Smith describes his efforts explaining the legislation to the public and working for support as a matter of “impressing that if you have a fire in your house within 18-20 seconds the fire is out [with sprinklers].”

After the legislation passed in 2012, there was a three-year graced period to opt out that ended in July 2015. During that time Smith worked tirelessly, meeting with elected and fire service officials alike to defeat introduced legislation which would have permanently given counties the opportunity to opt out of the installation of residential sprinklers in new construction. This legislation was introduced by Maryland Delegate Christopher Adams. Adams told local media outlets that the state’s law had the ability to negatively impact new home construction. To combat this messaging, Smith once again took to the legislatures to spread accurate information. “We knew it was coming,” he says. “We knew which committee it was going to and which subcommittee it would wind up in. We started visiting [committee members] and asking them for support. We brought documents with us. A lot of the information that was being passed out [from sprinkler opponents] was, as usual, incorrect,” recalls Smith.

In large part because of his efforts and those working with him, Maryland successfully defeated Maryland Delegate Adams’ proposed legislation that would have allowed an indefinite opt-out period. Smith tirelessly met with lawmakers and government officials as a proponent of the residential sprinkler legislation, but taking it a step further and utilizing his background in the fire service, to make compelling arguments about the importance of fire sprinklers (especially in such a volunteer firefighter heavy area) to the public as well. Of this outreach Smith says, “it was always very important to us to visit schools to impress upon kids the importance of fire sprinklers.” He continues, “It’s important because they take that information, internalize it, and bring it home to mom and dad.”

Even though Smith is proud to say the residential fire sprinkler requirements went into full effect in July 2015 and the opt-out legislation was defeated, he also says his work is far from done. He says that MSFA is still a consistently a strong advocate of fire sprinklers and he works tirelessly on its behalf while serving as vice chairman of MSFA’s Legislative Committee, to change the minds of those opposed to fire sprinklers or who think negatively about them. “There is a lot of misinformation out there on sprinklers. Like the myth that if one goes off, they all go off.” He elaborates, “We make sure to correct that misinformation with the public so as to hopefully change some minds of people who think negatively about sprinklers.” Smith says MSFA in conjunction with NFPA have also acquired burn trailers to present live side-by-side burn demonstrations at events and in counties that are less-than-keen on the current legislation. He says, “It serves as a traveling billboard going down the road. When we get there, people are intrigued enough to stop, watch, and hear what we have to say!”

Smith sums up his experience with not just this legislative battle, but with all of his previous and ongoing efforts by saying, “[Fighting anti-sprinkler legislation] takes a lot of time and dedication. Make friends with your legislators. Gain their trust. Supply them with honest-to-goodness facts. Above all, emphasize that this is a life-safety issue for the homeowner and fire service.”

What about now? These days, Smith still spends a good portion of the year traveling on behalf of the MSFA executive committee after retiring from his full-time job about seven years ago. He also took a new job at the local golf course for fun a few days of the week. Additionally, Smith is excited to begin taking an occasional, but well-deserved break in Florida in his new vacation home. However, a break doesn’t mean he’s done advocating for the firefighting profession or fire sprinklers by any stretch of the imagination. Smith still loves the work he does as much as he did on day one and is happy staying busy traveling and advocating for fire protection while balancing more time with his family.

If it sounds like Smith is extremely busy, it’s true. However, all this travel, hard work, dedication, and commitment hasn’t been without recognition as Smith has been the recipient of a number of prestigious awards in the past. First, he received the Senator William H. Amos Memorial Legislative award which is given in “recognition of an individual’s contributions and determination in promoting the betterment of Maryland fire, rescue, and emergency medical services through successful legislation and the legislative process.” Additionally, he has received MSFA’s highest honor, the Gladhill-Thompson Trophy, which offers the opportunity to “honor an individual who has made an outstanding contribution to the future welfare of MSFA.” Lastly, Smith was inducted into the MSFA Hall of Fame for his dedication, commitment, and hard work on behalf of MSFA.

“I would like to thank my wife Cindy for all the support and encouragement to get this far in the fire service,” notes Smith. “Without her, I would not have been able to accomplish what we did.”

Fire Sprinkler Advocate Award Smith’s newest award, AFSA’s Fire Sprinkler Advocate of the Year award, was created to honor individuals not directly involved in the fire sprinkler industry whose efforts have had national impact in advancing life safety and property protection through the use of automatic sprinklers. Each year, AFSA’s Legislative Committee selects a recipient from a pool of nominations, with approval of the AFSA Board of Directors. This year, Smith was nominated by Chief Stephan Cox, past president of MSFA. Cox said that “Chief Smith should be elected for his dedication and tireless hours of work in meeting with elected officials and fire serice officials to defeat legislation introduced to give counties the opportunity to opt out of the installation of residential sprinklers in new construction.”

AFSA Vice President of Meetings & Operations Marlene Garret is proud to recognize all of Smith’s accomplishments saying, “Richard Smith is a true inspiration and a well-deserving recipient of AFSA’s Fire Sprinkler Advocate of the Year award. He’s devoted much time and energy meeting with elected officials and fire service officials to defeat legislation introduced to give counties the opportunity to opt out of the installation of residential sprinklers in new construction. Maryland passed legislation that became law as of July 1, 2015, requiring new residences to have residential sprinklers.”

Smith will be presented with AFSA’s Fire Sprinkler Advocate of the Year award during the general session at AFSA37: Convention, Exhibition & Apprentice Competition on October 2 at the Gaylord National Resort in Washington, DC. To learn more about the schedule of events and register for AFSA37 visit firesprinkler.org/AFSA37.

Previous U.S. and Canada Unite During First Home Sprinkler Day
Next Learn and Earn at AFSA37