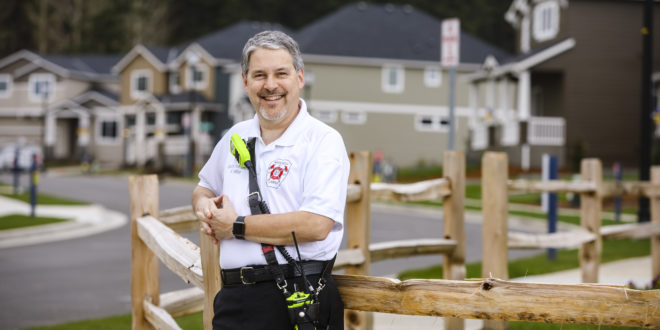 Deputy Fire Marshal Randy Miller, Camas-Washougal Fire Department, Washington, stands in front of one of the developments where incentives were offered to the developer because all of the homes are protected with fire sprinklers.

Focus is on Home Fire Sprinklers Installed in New-Home Developments

Each year, hundreds of thousands of single-family homes are built in the U.S., yet only five percent are protected by fire sprinklers. “That means that fire departments across the country are faced with both a fire-safety challenge and a public-safety opportunity,” states Home Fire Sprinkler Coalition (HFSC) President Lorraine Carli.

Some fire departments have been actively taking advantage of that opportunity. In Camas, Washington, the Camas-Washougal Fire Department began offering local home-builders development incentives in exchange for installed fire sprinklers 17 years ago. Their work has improved land use, benefitted local developers and most importantly, dramatically increased public safety. Today Camas has thousands of sprinklered homes. “People now love the fact that they have their family protected by sprinklers,” says Camas-Washougal Deputy Fire Marshal Randy Miller, AFSA’s 2017 Fire Sprinkler Advocate of the Year. “We’ve even seen an attitude change in some builders who understand the value of them and really don’t oppose us on them anymore.”

What’s a fire sprinkler incentive? Incentives are locally negotiated, and do not require sprinkler code requirements. Authorities Having Jurisdiction (AHJs) can offer these to homebuilder-developers because fire sprinklers eliminate the need for certain routine requirements in unprotected new-home developments, such as wide streets, increased hydrants, and water expansion. By installing sprinklers, developers get valuable benefits that either reduce their costs or add to their profits.

This is a model that can be replicated in most jurisdictions and it’s worth considering. Big homebuilders and developers often put in 50 or more houses in each new development they build. A fire department working with just one builder could protect hundreds of residents with long lasting benefits for the entire community.

But a pair of fire service and homebuilder surveys recently conducted for HFSC show that too few fire departments actively participate in their local planning and zoning process or negotiate with builders to get sprinklers. The national Firehouse survey found that less than half the respondents were aware of home fire sprinkler incentives such as those used in Camas. And HFSC’s HanleyWood builder survey showed that 94 percent of respondents said they’d never been offered incentives from their AHJs in return for sprinklering new developments. More than half said they’d be interested in installing fire sprinklers if incentives were offered.

“Couple this encouraging homebuilder interest in incentives with a solid single-family housing market in most of the country and you can see the powerful prospect the fire service has of improving new housing stock and bolstering their community risk reduction efforts,” Carli says. “They just need some assistance to get their foot in the door. That’s where HFSC comes in.”

HFSC recently launched a national educational program to vigorously help fire departments of any size and type educate their local homebuilders, planners, consumers, and other stakeholders in their jurisdictions. The program includes new resources to ensure more in the fire service know about the important role they can and should play with homebuilder-developers. It features turn-key assets they can use throughout the new-home planning, zoning and permitting process to achieve sprinkler protection of entire developments.

“The key is for the fire service to get involved prior to the permitting phase,” Carli explains. “They need to identify development plans and start talking with their local decision-makers early on. The tools we’re rolling out will simplify that process for the fire service.” 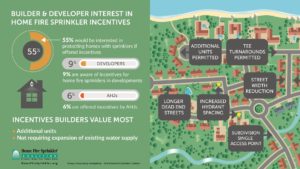 Among the new free resources is a comprehensive microsite, homefiresprinkler.org/built-for-life-community, housed on HFSC’s website that provides the fire service with step-by-step guidance. The content ranges from the very basics of understanding home fire sprinklers to learning what incentives are (and seeing examples that are most commonly used) to conducting outreach and preparing presentations to get to agreement on home fire sprinkler installation.

Among the advocates featured in the new microsite is Chief Dennis Compton, chairman of the National Fallen Firefighters Foundation (NFFF), a member of HFSC’s board of directors. “You don’t have to wait for sprinkler codes to change the future of fire safety in your community,” he says. “But it’s unlikely the homebuilders will come to you.”

What Can You Do? “Anyone can get involved in HFSC’s new program,” says AFSA President Frank Mortl III, CAE, an officer on HFSC’s board. “Your fire department will welcome your support and participation. If you have new housing start information, share it with your department. If you have experience in NFPA 13D systems, offer your expertise to the department and as part of their presentations to local planning boards. Maybe you can support a fire department’s public education efforts by donating material for live flashover and sprinkler side-by-side demonstrations and 13D riser displays. Make a call today to see how you can help your department offer incentives for fire sprinklers.”

ABOUT THE AUTHOR: Peg Paul is founder and president of Peg Paul & Associates (PPA), Frankfort, Illinois, a marketing communications agency that specializes in developing and implementing multi-integrated information and education campaigns. While the agency supports a wide range of client needs, PPA has established a niche in public safety promotion, and has been retained for this purpose by some of the leading national and international safety advocacy groups, trade associations and industries including HFSC.