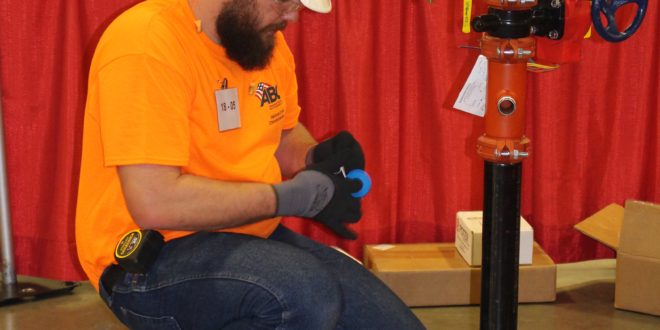 In the first week of March, 11 fire sprinkler apprentices from all over the United States descended upon Fort Lauderdale, Florida for the 2016 National Craft Championships (NCC). Held during the Associated Builders and Contractors, Inc. (ABC) Workforce Development Conference, the NCC hosted 200 craft trainees who competed for top honors in 15 competitions representing 13 crafts, from carpentry to HVAC to fire sprinkler. Competitors first took an intense, two-hour written exam, and then competed in a day-long, hands-on practical performance test.

The competition began at 8 a.m. Inside the convention hall, competitors in bright orange shirts and white hard hats stood in closely gathered groups, receiving instruction from competition officials. Families, friends, and all competition onlookers were kept outside the doors until the buzzer sounded the start of the competition. When the signal echoed over the concrete, the doors opened and the convention floor was flooded with eager attendees. Oblivious to their audience, the fire sprinkler apprentices began their work, crouched on the concrete before a small wooden platform and plethora of disassembled parts, armed only with their tools and a few instructions. Competitors were tasked with building a dry pipe valve riser. Then, they were instructed to trim the dry pipe valve as detailed in a product data sheet provided. Points were deducted for trim that did not appear to be straight or had leaks during testing.

The competition was heated. Some competitors spent extra time prepping their materials, while others began building right away. Some were slow and methodical while others worked swiftly. The competition lasted until the buzzer sounded at 3 p.m., and except for an hour-long break for lunch, the apprentices were hard at work the entire time. When an apprentice decided he was finished, he called the judges to his station and, in the presence of a judge, identified all riser and trim components, port locations and their functions. He performed a hydrostatic pressure test at street pressure and set a dry valve with appropriate air pressure. He then performed an annual operation test (trip test). After resetting the valve, he performed the quarterly water flow alarm test. Finally, he explained the function and importance of a main drain flow test.

“We had contestants run the gamut of finishing early to finishing right on time,” says Victor. “They were all challenged – a number of them had never done this task before. Every one of them I think enjoyed themselves highly and are going to walk away from this having learned a new skill.”

Winners were announced at the awards breakfast the following day. AFSA members Nathaniel (Nathan) Lee and Douglas Nelson, both of Cox Fire Protection, took first and third place, respectively. The Safety Award went to Jarred Sutliff of Cen-Cal Fire Systems, who won the AFSA Apprentice Competition in Phoenix in 2015. His AFSA win included the chance to compete in the National Craft Championships.

Gold-medal winner Nathan Lee was more surprised than anyone by his own win. As a layout technician for Cox, he draws blueprints on a daily basis but he hadn’t touched a wrench in over a year. But while the practical test was a challenge, he knew he had come prepared. “It’s a lot of stuff that I deal with on a daily basis,” says Lee. “Knowledge I’ve used in the field before or in drawing. The guys that design still have to be able to build what they’re drawing. It’s important to know how it works. The competition really reminded me of how much detail goes into what we do.”

Lee entered the fire protection industry in 2009 and began working for Cox Fire Protection in 2012. “They’re great people,” he says. “They have recognized potential in me. Anybody who works [at Cox] who has initiative and drive to push forward, they are going to get you the education you need to further your career. They’re interested in getting quality craftsmen into the field and they hope to inspire loyalty. They have with me.”

The whole convention was a whirlwind for Lee, from dinners out with different fabrication companies, to networking with other apprentices, to being called on stage as the gold medal winner. Even though he and several fellow competitors went home with the flu, it was an event he will always remember fondly.

Now that he has won the gold, Lee intends to continue to pursue designing. “I like to be really good at something that I’m doing and grow as much as I can in that area before I move on,” says Lee. “I’d like to keep designing for three or four years to achieve quality craftsmanship. Ten years down the road I’d like to be running my own company.”

The winner of the bronze medal, Douglas Nelson, also works for Cox Fire Protection. He began with the company five years ago and has thoroughly enjoyed his time there. Placing at the National Craft Championships has gone a long way toward validating his career. “The competition is a chance for me to show everyone what I can do,” says Nelson. “I have been putting in the time and working hard to be a top professional in this trade.”

Brown retired from AFSA on April 15, 2016, and he will be missed by all of his colleagues at AFSA and in the industry as a whole.

Since 1987, the National Craft Championships has seen more than 2,000 men and women compete in what has grown to become one of the construction industry’s most recognized and revered craft skills events. The fire sprinkler apprentices that competed this year were all at the very top of their field, and while only a few went home with medals, each one left Florida with a valuable experience under their belts and a fresh perspective on their trade.