“We at the Center For Life Safely Education are honored to have this opportunity to establish an endowment on behalf of Philip L. De Camara, Jr. at the University of Maryland,” says LaVerne Davis, vice president of CLSE. “It will benefit the brilliant minds who study fire protection engineering and go on to make a positive and life-changing impact in our industry.”

To be eligible, students must be a junior or senior enrolled in the University of Maryland’s Department of Fire Protection Engineering. Each award is based on the student’s character, leadership, and academic excellence with a demonstrated personal commitment to the area of fire safety. Recipients will be selected by a committee, led by De Camara’s widow Terry, that will evaluate each application.

Though many knew his name from his many industry involvements, many more will recognize his name by the endowed scholarship created in his honor. “The endowment of the Philip L. De Camara, Jr. Scholarship is very meaningful to my entire family as it allows Phil’s legacy to live on through the amazing students who have been granted scholarships,” says Terry De Camara. “My husband, Phil, would be very proud to know that such talented students will have a positive impact on the sprinkler community that he loved. Phil graduated from the University of Maryland so that is an added bonus for our family. My children and I deeply appreciate the support of AFSA and all who contribute to help keep Phil’s memory alive.”

After graduating from the University of Maryland in 1962, De Camara’s career progressed with him assuming the position of executive vice president of Central Sprinkler Corp. in Lansdale, Pennsylvania and later president of De Camara Fire Protection Products in Ivyland, Pennsylvania. Widely known and respected in the fire sprinkler industry, De Camara became involved in AFSA in the early 1980s and later helped to establish its first Manufacturers/Suppliers Council, giving these members a voice within the association.

“The Philip L. De Camara Jr. Memorial Fund was established in 1984 to honor the career of Philip De Camara, who became an advisor to the then newly established American Fire Sprinkler Association upon its founding,” says Kyle A. Zeller, associate director of development, individual giving at Maryland’s A. James Clark School of Engineering. “By endowing this scholarship, the Center for Life Safety Education has cemented Philip De Camara’s legacy at the Department of Fire Protection Engineering at the University of Maryland in perpetuity. This scholarship will help the Department to recruit, retain, and graduate the most promising students in fire protection engineering. It is a fitting tribute to a man whose career was devoted to the fire protection industry.”

De Camara was a tireless fire sprinkler advocate and continually gave back to the industry working to further the cause until the very end. In October 1983, De Camara, 44, died of a heart attack, leaving his wife, Terry, and their five children: Philip III, Andrew, Matthew, Nancy, and Joseph.

Now, 35 years after her husband’s untimely death, Terry’s hope is this endowed scholarship in her late husband’s name will continue to invest in the next generation of fire protection engineers for years to come. Your tax-deductible donations to the Philip L. De Camara, Jr. Scholarship will directly support and fund the education of future industry leaders. For more information about the scholarship, its criteria, or to apply, visit clse.org. 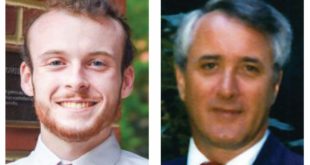