AFSA36 is the Biggest Industry Event Ever 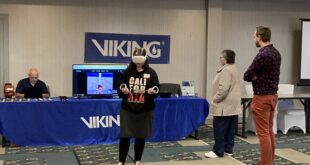 “I am so proud to see that we broke records in every category this year from total attendance to the largest exhibitor participation,” says Marlene Garrett, CMP, vice president of meetings & operations. “You could feel the excitement and energy throughout the event. This reality makes me proud of our organization and industry as a whole to see how passionate our members are to take part in this training year after year.”

The week began Monday, September 25 with educational sessions, featuring a record-breaking 45 seminars on topics that promised to bring value to attendees’ operations. From learning how to optimize their business to a discussion on code updates, the over 1,400 participants were given the tools needed to further improve their fire sprinkler businesses.

As one attendee noted, “Every year we say it gets better and better, and 2017 was no exception.”

On the afternoon of Tuesday, September 26, more than 400 attendees stood silently with their hands over their hearts as the convention kicked off with the National Anthem performed by Trina Heinrich of Bamford Fire Protection in Salina, Kansas, during the General Session, which was emceed by comedian Andy Martello from NBC’s Last Comic Standing.

Following the opening session, attendees had the opportunity to explore the industry’s largest fire sprinkler exhibition, which hosted 165 booths sprawling over four ballrooms. As one exhibitor put it, “[AFSA36] gives us the best direct exposure to our core customer base. There is no better event to introduce new products, solicit customer input on potential new products, and to simply enjoy time together with colleagues, distribution partners, and customers.”

Technical and educational sessions provided attendees with the latest research, best practices, and the opportunity to earn CEUs/CPDs. After Wednesday’s educational opportunities, attendees were able to look on as the seven apprentice competition finalists built mini fire sprinkler systems in the heart of the exhibition hall.

In addition to the industry’s largest trade exhibition, AFSA hosted a number of networking events, such as the Rat Pack Awards Party where attendees and guests gathered on the Bellagio pool deck for an evening of networking, entertainment, and great food.

Other highlights of AFSA36 were networking meals, NextGen Day, and the semi-annual Chapter Leadership Conference.

“As the highest attended fire sprinkler event in the history of the industry, AFSA36 provided elite levels of education, networking, and product innovation along with a forum to celebrate the association’s accomplishments,” states AFSA President Frank Mort III, CAE. “Another world-class event is expected for Washington, D.C. in 2018, which will be designed to professionally develop our regular convention attendees as well as many more new participants.”

AFSA37: Convention, Exhibition & Apprentice Competition in Washington, D.C., will take place at the Gaylord National, September 30 – October 3, 2018. Mark your calendars and plan to attend this gathering of industry leaders from around the world. More information will be available at firesprinkler.org in spring 2018.